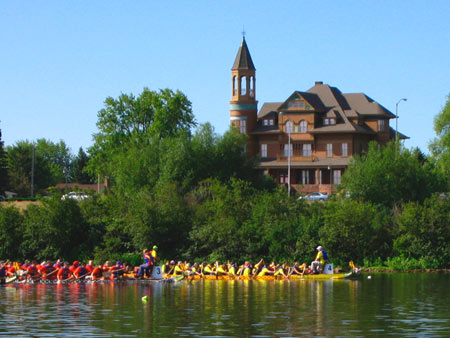 One of summer highlights in the Duluth-Superior Twin Ports area is the annual Lake Superior Dragon Boat Race & Festival the last weekend in August. In 2007 the festival attracted 86 race teams and over 1900 competitors from the United States and Canada. In 2011, 92 teams were signed up to compete; in 2014, 88 race teams competed. The Lake Superior event is one of the largest Dragonboat races in North America.

Dragon Boats are huge canoes with a crew of 22. Befitting its name, the bow of the canoe is decorated with a Dragon masthead. Dragon Boat Race rules require that every team must have at least 8 women members among its 20 paddlers. Rounding out the crew of the boat is 1 drummer and 1 steersperson. Similar Dragon Boat Festivals are also held in Thunder Bay, Ontario, Sault Ste. Marie, Ontario, and Grand Marais, Minnesota.

The Lake Superior race is held in a protected part of Superior Bay on the south side of Barkers Island. The island is host to all the other activities associated with the festival and the team campsites. Sponsored by Superior Rotary Club and Duluth's Harbortown Rotary Club, the Festival opens on Friday with a team parade, opening ceremonies, the food & beer tents, and entertainment on the festival stage. The race itself starts bright and early on Saturday morning at 8:00 am. With 86 - 96 teams competing and 46 - 50 race heats, they have to get going early to finish before dark!

Several other activities run concurrent with the race heats. The Superior Optimist Club hosts a pancake breakfast from 7 am to 11 am. Various entertainment is on the main stage from the morning to late afternoon. Entertainment continues into the evening at the Barkers Island Inn Festival Tent. The Kiwanis Club hosts special activities for kids. Naturally the food and beverage tents are in full swing. Nearby parking is free and there are free shuttle buses to and from more distant parking at the Mariners Mall.