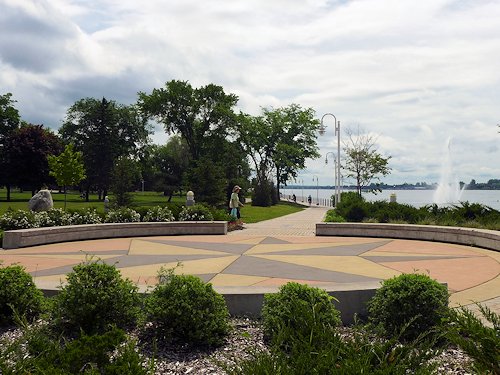 Strategically situated on the St. Mary River between Lakes Superior and Huron, the "Soo" is one the oldest communities in the upper midwest. Whitefish Island, in the St. Mary's channel, was an Ojibwa settlement more than 2000 years ago. Early missionary explorers established outposts here along the portage route around the St. Mary's rapids. The first mission by Father Jacques Marquette was founded in 1668.

There are many visitor attractions among them: the waterfront boardwalk & Bondar Pavilion, Sault Ste. Marie Canal and Locks, St. Mary's Island, Boat Cruises, and the Algoma Central Railway tour trips. On one Circle Tour trip, we discovered an impressive waterfall within the city limits in Hiawatha Park.

One of the most popular "Soo" attractions is the Agawa Canyon Tour Train. The Tour Train requires an entire day, leaving at 8 am and returning at 5 pm. They also have a neat sounding "Camp Car" package that is a five day trip using a refurbished caboose as your cabin on wheels. Three of the days are spent on a side rail track "camping" in the canyon itself.

On our first visit we were surprised to find ourselves in the midst of an Italian community and so treated ourselves to some of the finest Italian food we've had outside of Chicago. Seated not too far from us were Grandpa and Grandma with some little ones, speaking not English or French . . . but Italian! 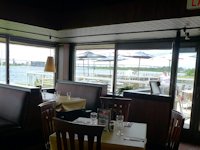 On our later visit we dined at the Dockside Riverfront Grill & Restaurant. Jo had a mozzarella & mushroom burger and I had their special reuben burger plus a nice cold 20 ounce schooner of Molson Canadian. It was a sunny day so we dined outside on their deck. The inside dining room also has good views of the river and an attractive decor and atmosphere that was nicely appointed; it could be described as fine dining. Wed like to come back here at a future date to try out their dinner fare. Our young wait staffer was friendly but a little inattentive, which I suspect was due to inexperience.

Get Acquainted with current Passport Regulations - There are new requirements for motor travel between the United States and Canada. 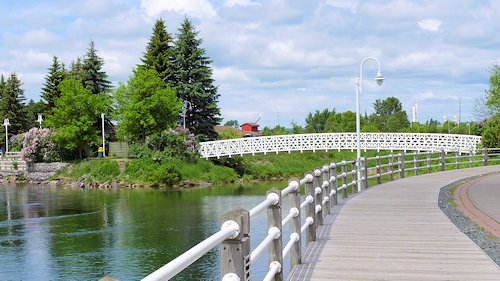 One of our favorite Soo activities is strolling the Downtown St. Mary's River Boardwalk that runs from Canal Drive

On July 1st, Canadian Independence Day, the waterfront docks were full of tugboats for the great tugboat race. Adding to the celebration & merryment was a concert in the Pavilion.

If you've got more time, go over the bridge of Canal Drive and tour the Sault Canal Historic Site.

There's a history exhibit in the visitor center. The locks are still used for recreation and tourist boats so you can see them in operation.

Across the canal locks on St. Mary's Island (in the center of the photo to the left) is an interesting network of hiking and nature trails (the Attikamek Trail).

Only a few minutes away from the busy locks, you are in the wildlife and nature sancturary. > > >

The canal locks on the Ontario side primarily serve recreational and tour boats. The commercial locks for the big ships and "lakers" are located on the US side in Michigan's Sault Sainte Marie Soo Locks. That is worth a stop too.

Crystal Falls has one of the higher vertical drops of the falls around Lake Superior. It stair-steps down about 90 feet. It is located in Hiawatha Park on the city's NE edge.

A decent network of hiking trails surrounds the area, including many for winter use - both cross country skiing as well as some snowmobile trails (i.e. snowmachine trails in Canada!).

There is a small lake below the falls with a nice sandy swimming beach. But the pavillion is in disrepair and other evidence in the park indicate it no longer receives the use and attention it once did. Which was fine by us because on July 1st, Canadian Independence Day, we had no problem finding a good parking place and had the trails largely to ourselves.

There are two privately operated campgrounds at the north end of town off Highway 17N. During our 2010 UP Michigan Color Tour, we had a chance to stay at the Sault Ste, Marie KOA campground. Unfortunately heavy rains caused us to shorten our stay but from our first and brief visit we found the campground quite satisfactory - semi-wooded, level sites, clean facilities, and friendly hosts.

The camping park we usually stay at is several miles west of town off highway 550: Pointe Des Chenes Family Campground, operated by the Lions Club. It is on Whitefish Bay at the mouth of the river. Great sand beach with a good view of the Lakers (huge freight ships that run on the Great Lakes) as they approach and leave the locks area. Lots of room for kids to play and run around, but also well regulated to avoid the nuisance that older kids can present.

Going south towards Sault Ste Marie, Michigan & into the US

Note to US Residents.
Travel into Canada may be restricted due to COVID and varies by Province. Go Here for further information.

See some amazing waterfalls at Rossport and Terrace Bay, along the Lake Superior Circle Route.