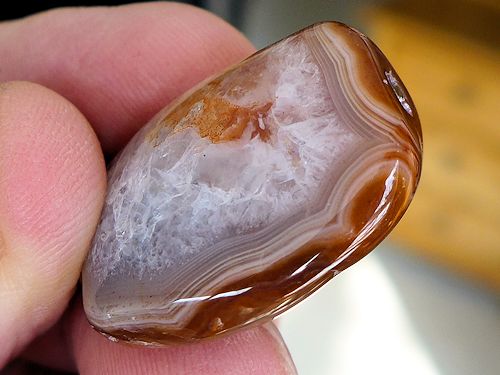 One the agates my wife Jo found on a Lake Superior beach in the Michigan Upper Peninsula.

I've previously covered the basic tumbling and polishing process for Lake Superior Agates and Beach Rocks using a vibratory tumbler. On this previous page I had mentioned I had just started using some tumbling pellets and would report on how that has worked. So I'll do that here as well as show you some of the agates we've found and polished, plus some other pretty rocks we've also tumbled and polished.

Since our last posting on rock tumbling and agate collecting, Jo and I attended the Lake Superior Agate Festival in Deer Park Michigan. Lots of fun meeting other rock hounds, enjoyed the lectures and field trips, plus touring the various stands set up by amateur collectors and rock and gemstone purveyors. This was our first visit to Muskellonge State Park. Liked the facility and they have a nice rock collecting beach - that naturally got a lot of action due to the campground being mostly filled with rock hound enthusiasts.

One result of attending the festival was the conversion of my wife Jo from a casual beach rock hound who would give up the search after an hour or even less to a dedicated agate hunter. The Festival and reading Karen Brzys' Agates Inside Out book and a few of my other agate and rock picking guides (see myrecommendations below), she has been able to find several agates on the beach plus identify several more among my collection of beach rocks from earlier excursions. So she is now the Agate Queen of our household. Most of the agates pictured below were either collected by her or found among my collection (my eyesight isn't too hot which is why I apparently overlooked some agates amongst my collected stones). 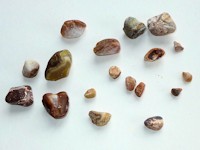 < < < Here's a picture of a collection of agates prior to tumbling. In addition to the agates we selected several other rocks and stones that we felt would polish up to attractive specimens - jaspers, quartz, grranite, cherts, slate, gneiss, and other conglomerate rocks comoposed of several minerals and cyrstals. I had a little room left in the tumbler so I added about two handfuls of tumbling pellets. 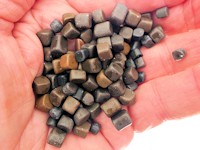 The pellets I tumbled with my rocks are shown in the next picture. I got them from a rock tumbling supplier who attested to their durability and efficiency. They are some sort of hard synthetic material and rectangular shaped. In the rough stage the pellets main job is provide more surface contact to the rocks to speed up and make more complete the removal of material from the outer layer of the rocks. Previously I had used a collection of small beach rocks and pebbles to accomplish this purpose.

One thing I noticed right off is that the pellets tended to migrate to the bottom of the tumbler where they seemed to stay in a mass with only a small portion of them rotating around within the jug along with my object rocks and agates. This rough stage went OK; I let them run for about a week. One thing I learned at the Agate Fest is you don't need to rough off or remove every single imperfection from the entire rock or stone so I stopped when I could see that the agate portion of the rocks or the attractive features of the other stones were sufficiently smoothed. However I couldn't really see any improvement in the speed nor effectiveness of the removal of material due to adding tumbling pellets.

Previously I had indicated a problem I had with fracturing some of my rocks during this stage. This is because the finer grit used at this stage allows more rock to rock contact with potentially more aggressive jarring that could cause these fractures. The pellets were supposed to help cushion this action. So I added a few more handfuls of pellets during this stage, bringing the ratio to perhaps one fourth or one fifth of the tumbler was pellets.

After 24 hours I checked the batch and some of the rocks were nicely smoothed. However I also noted a few fractures on some of them. So I added extra water to the batch to slow down the tumbling action. So my conclusion here is the pellets offered no additional margin of protection. While there were more pellets rotating with the main batch of rocks, most were the bottom of the barrel where I suppose they would contact the rocks as they did their vertical revolution in the tumbler barrel.

After washing my rocks and pellets thoroughly I loaded my batch into my polishing barrel for trhe last stage. I put the standard amount of water in the barrel, enough to make a light paste solution with the Aluminum Oxide tumbling powder. At 24 hours some of the stones looked good, but some others needed more tumbling, so I did about another 12 - 16 hours, adding a good deal more water for this extended period, thinking that would further cushion the material.

When I inspected my finished batch of agates and rocks I discovered even more fractures and on several of them were little chips or dings. I wonder if the tumbling pellets as they are not rounded but essentially cubes, like little dice, with 12 blunt edges on them contributed to the fracturing. Another factor could have been that I added too much water for this extended period of polishing. With water up near the top of the mass of rocks, I noticed they weren't revolving or rotating that much. So maybe the rocks tended to stay in one place and just vibrated. Perhaps the repeated hammering in one place contributed to the fractures. So it may be true that additional water can slow down the movement of the rocks and moderate the vibration, too much water could be a bad thing! 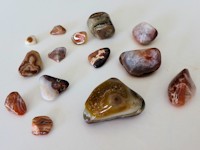 I think using the pellets lulled me into complacency. Thinking that I had the problem of fracturing covered, I didn't properly attend to other factors, like the amount of water and including in the batch a good mix of different size stones. The right amount of water is what produces a batter-like consistency that sticks to the stones as they are tumbled. Too thin you might get fractures. Too thick your grinding, sanding, or polishing material won't have enough surface contact with the rocks to do the proper job. The pellets did not serve to balance out the load. For one thing, they all are about the same size and weight. Secondly they tend to migrate to the bottom of the tumbler vs staying the tumbling medium with your object rocks.

So my take-away from this experience is to use only a modest amount of pellets, only enough to fill the bottom part of the tumbler. Instead I should use a good variety of different size stones, including some beach pebbles. In the future I'll be saving a set of smaller rocks and pebbles that I'll use over and over again to balance out my loads. I''ll monitor more closely the thickness of the slurry to keep that batter-like consistency and avoid adding too much water. The stones need to continually rotate and the batch needs to continually revolve so the rock to rock positions are always changing. Having the rocks sit in one place vibrating against one another is not good.

One reference source of mine had mentioned adding corn starch as a thickening material. I recall using this one time in the past. The starch or other granular medium won't migrate to the bottom but rather stay in the slurry that surrounds the rocks. So that is something to keep in mind if you experience fractures as I did. 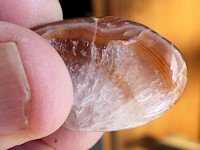 Here's a close-up shots of the damage on one of my agates sustained due to my tumbling errors. What a disappointment to have a rare find and almost two weeks of tumbling and polishing end with this sort of damage.

Future use of Tumbling Pellets

In the future I'll be using small rocks and pellets from Lake Superior beaches to supplement my batch of tumbling rocks instead of the tumbling pellets. These smaller stones have no blunt edges and are of the same material as the rocks so I expect less damage. I may use a few handfuls of pellets to simply occupy the bottom of the tumbler so that my smaller rocks and pebbles can rotate or revolve along with my object rocks. Or I might use more pellets because I don't think the fractures occur at this stage. Perhaps this is because there is so much mud generated in the removal of material that the mud itself softens the shock of the vibration.

But at Stages 2 and 3 I am going to use either very little or none of the pellets. I'll rely almost totally on the smooth small rocks and pellets (which I'll be using over and over on successive batches) to help balance the load. And I am going to make sure I use enough water to cushion the vibration. If that means having to run the material another day, two, or three to finish the stage, so be it. Saving time at these last two stages at the cost of damage to your polished rocks and agates is not a good trade.

A few more close-up pictures of some of the Agates we tumbled in this batch. 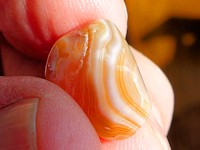 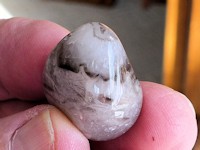 Not all agates found on the beaches are Lake Superior Agates. This one is an example. It lacks the the set of parallel translucent bands of the above agates, yet it's translucent, colored microcyrstaline indicate it is an agate. In fact it looks alot like the marbles when I was kid we called "aggies" which were prized marbles you hated to lose in a game.

Some Photos of Agates Found in May 2016

See my article on using Rock Tumblers to shape and polish Rocks and Agates.