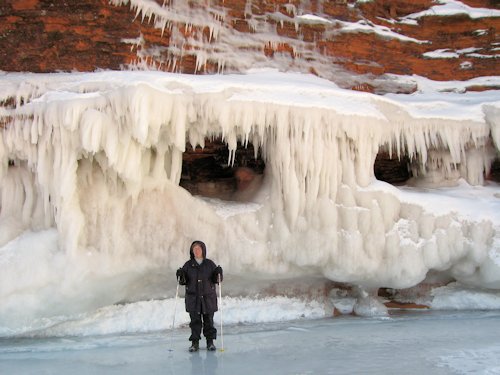 The best way to see the ice caves and ice formations is to get out on the ice.
Ski poles and ice cleats are helpful getting around.
- Many more photos and a video below -

When will the Bayfield Lake Superior Caves open?

At present the Park Service has declared unsafe ice conditions, so no touring the Ice Caves for the near future. But you can look at the pictures below and also consider taking the land-based Lake Shore Hiking trail where you'd be able to glimpse some of the formations (there is information about the Lakeshore Trail near the bottom of this page)

For the most current conditions, see "Ice Caves Web Cam" link at the bottom of this page and check our Winter Weather & Snow Reports page for more detailed information.

Opening and Closing. Watch this space for notices on when the US Park Service certifies the ice is safe enought to cross. Also for notices on the Madeline Island Ice Road.

Alternate Route to visit the Ice Caves - see information at the bottom of this page.

Contact Phone #s, Directions and Advice on touring the ice formations are at the bottom of this page.

- Other Bayfield Attractions -
Links of things to see & do

We greatly enjoyed our first visit to the Bayfield Ice Caves, so we had no problem talking ourselves into a return visit. Located near Cornucopia Wisconsin, and part of the Apostle Islands National Park, the Lake Superior Ice Caves are located at the NW tip of the Bayfield Peninsula. Each year Mother Nature creates a new landscape in the ice formations so even if you've been to the Ice Caves 10 times before, your next trip will always have new surprises.

While we brought our snowshoes we left them in the car because there was already a well trodden path to the caves and no substantial recent snowfall. I think they may have made the trip out to the caves a little easier - primarily because we could have taken short cut rather than trekking along the beach path.

Visiting the Sea and Ice Caves. See our tips near the bottom of the page, below the photos and video. 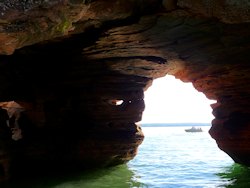 < < < Here's photo from a summertime Sea Caves Boat Tour, followed by a photo of the same scene during one winter.

Every year Mother Nature sculpts unique formations in ice and snow which is why many people make an annual visit to the Bayfield-Apostle Island Park Ice Caves to see the latest exhibits on display. In recent years the ice hasn't been thick enough to allow the Park Service to OK the safety of the trail. But the winter of 2014 was very good for thick ice and thousands of people have enjoyed the trek out to see and experience the ice caves and ice sculptures. 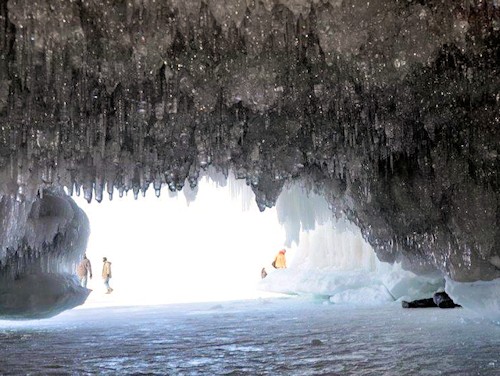 There was a steady parade of people coming and going to the Caves. It is a one mile hike just to get to the start of the caves and then another two miles if you go all the way to other end. > > >

If you want to see the Ice Caves in comfort, flying may be the way to go. This plane made several low level passes by the Sea Caves giving the passengers a unique view. > > >

Kids had lots of fun climbing into the caves. > > >

I recognized this rock formation from the last time we took the Apostle Islands Park Lakeshore Hiking Trail in the summer to the top of the caves.

Here's this formation as viewed from the top in the summer (see right).

< < < This one reminded me of the jaws of the Alien Monster in the classic movie "Alien."

On the way back, the setting sun provided an attractive silhouette for these two pictures.

< < < Ice Cave Trekkers almost finished with the long hike back to Meyers Beach.

Here's a video of Jake Ring's visit to the Wisconsin Lake Superior Ice Caves in February of 2014. Thanks Jake for sending this along to us. 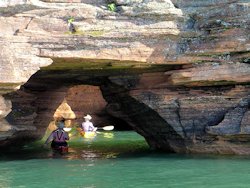 Lake Superior Ice thickness varies from year to year. In 2009 as of Feb 1, the over-the-water ice cave trail was open and the ice safe enough to walk on and trail was well trodden by that time. But when I checked on conditions in 2011, by mid-February the lake ice trail had yet to be declared safe and for the rest of the season remained closed. In 2014 ice formed early and was safe by mid-January. In 2015, the ice trail to the caves opened on Feb 21st.

In 2016, the trail was close to opening mid-February but then winds and warmer weather broke up the ice and the Park Service did not certify it as safe.

As of February 23, 2022 the ice to and around the Caves is still deemed unsafe. 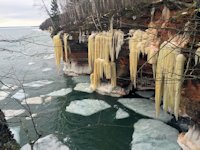 An Alternate Route. Prior to the ice trail being certified as safe, you can still see some of the Ice Caves and Ice formations by taking the overland route along the LakeShore Hiking Trail (See pictures and more information here)

Another Alternative to Explore: WolfTrack Guides - Snowshoe Adventures to the Ice Caves, led by a guide from the Red Cliff Tribal lands section of the Bayfield Ice Caves.

Are the Bayfield Ice Caves Open & What are Conditions?

The Bayfield Chamber of Commerce also posts information on their Winter Recreation Report page. Another source is the Apostle Islands Facebook page.

When you go, bring some beverages and bars with you because the hike to the caves, then touring the caves themselves, and hiking back can easily take a couple of hours. (You'll walk from 3 to 6 miles depending on how extensively you explored the ice caves) I've been told porta-potties are on site but it would be a good idea to take care of those "chores" before you get to Meyers Beach (especially on a weeekend). Also on a weekend because of parking out on the highway you may have to walk a distance before getting to the lakeshore. I've heard there are shuttle buses between Meyers Beach and Cornie but a good idea to check that out ahead of time either in Bayfield or Cornie depending on which direction you are coming from. 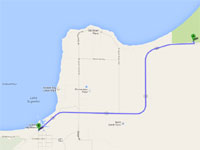 Directions to the Ice Caves. The turn-off to Meyers Beach (parking for the Ice Caves) is 4 miles east of Cornucopia on Highway 13. (click on map for Ice Caves parking lot location)

Ice Caves Volunteers - Thanks to the Bayfield Chamber of Commerce & Visitors Bureau and the Friends of the Apostle Islands for providing funds to maintain seasonal park service staffing for the Ice Caves. And the Town of Bell has volunteered to assist in keeping the Meyers Beach road & parking areas plowed and clear of snow. 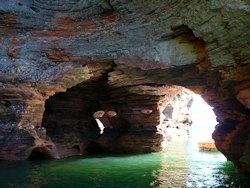 See the Sea Caves in the summer by Kayak or Boat Tour.