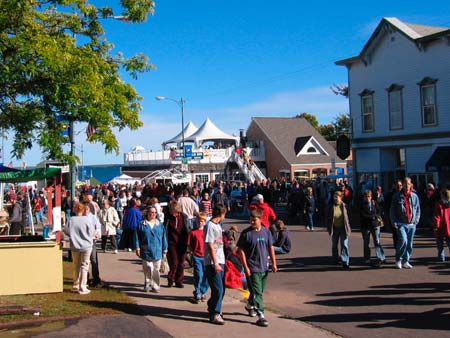 A beautiful sunny day ushered in our arrival on the first Saturday in October to the 43rd annual Apple Fest. Since we got a late start we encountered the expected Highway 13 traffic jam miles before arriving in Bayfield. As we have done in the past, we elected to detour on County J to stop at Hauser's Superior View Farm for some apples and apple wine before going into town. But a similar traffic and parking jam at Hauser's changed that plan so we headed to town via rural roads northwest of Bayfield and found a nice parking spot at the top of tenth avenue.

Despite competing with thousands of other people and cars converging on this village, I've never found the traffic and crowd experience objectionable. The community has been sponsoring this festival for many years and they do have their act together!

Scenes from the Bayfield Apple Festival

In 2018, a Farmers Market has been added to the Friday festivities, seating has been added along Rittenhouse Avenue for visitors to relax while enjoying festival foods, and a new entertainment stage is being set-up. For more information, see the links near the bottom of the page. 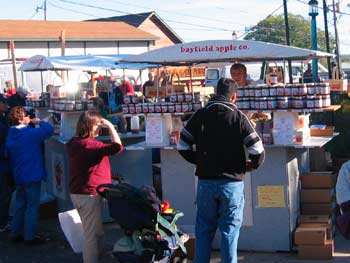 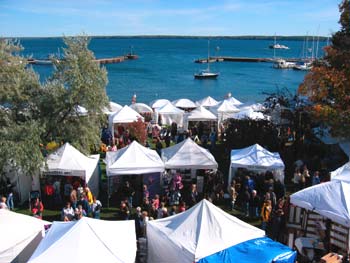 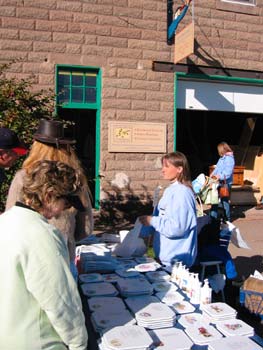 In addition to the artists, there are numerous crafts exhibitors as well.

I was pleased to find many that were made in the upper midwest and NOT made in China!

Joanne found a nice hot plate to match the quilted hot pads she plans to make for a Christmas present.

And even More Apple Fest Pictures . . .