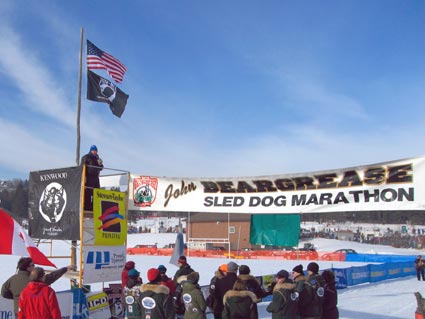 At almost 400 miles, the Beargrease is the longest sled dog race in the lower 48 of the United States. Below is our report and photos from the last race we attended.

Get Lodging for the Marathon Here 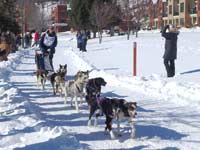 The race began, with a field of almost 30 teams, on the last Sunday in January in Duluth, Mn on the running track of the Ordean Middle School athletic field.

The race route then wound its way across a golf course and a route through suburban Duluth to the first checkpoint at Billy's Bar. The race route then follows skiing and snowmobile trails along the North Shore to the trail center at Poplar Lake - only a few miles from the Minnesota-Ontario border. Racers were expected to arrive at the half-way point between Monday night and Tuesday morning. Then the racers turn around for the return leg arriving at the finish line in Duluth sometime on Wednesday.

Teams must rest at least 32 hours during the race, including two mandatory 6 hour layovers, one 6 hour layover on the up trip and one on the down trip. The choice of when to schedule your rest stops is a key element of strategy. Most teams have a "pit crew" who rendevous with the teams at various checkpoints to assist with the care of the dogs and with any needed repairs to the sled. The crew also keeps notes on the times and running status of competitors so these pit stops also become race strategy sessions.

For part of the race Tim Calhoun from Tomahawk, Wisconsin was leading the pack, but it turned out that his early pace was too strong as he only had six dogs of the twelve dog team finish the race. The warm weather at the start of the race actually put a stress on the dogs; they felt so good they tended to run too strongly and wear themselves out. Then on Tuesday high winds and below zero temperatures settled in causing several teams to lose dogs and drop out of the race. A number who were planning on running the Iditarod in Alaska dropped out at the half-way point as they didn't want to risk injury to their team. Jason Baron of Lincoln, Montana won the race with a total trail time of 34 hrs, 43 minutes, and 26 seconds and finished with 11 of his 12 dogs. Duluth resident John Stetson finished second with 10 dogs. The top woman finisher was Rita Wehseler of Tofte, Minnesota.

The rigs used to transport dogs and sleds ranged from trailers pulled behind pickup trucks to specially equipped RVs that housed dogs, people, and sleds. > > >

< < < Like smart athletes, these guys were relaxing and conserving energy before race time!

Jaye Foucher, of Ashland, New Hampshire, had an enthusiastic start but went into the first turn so fast that Jaye's sled tipped over losing Jaye in the process! She had to chase it for a half mile before some race bystanders helped stop the team. > > >

< < < Tim Calhoun of Tomahawk, WI was an early leader and as the winner of last year's UP200 race he was expected to compete quite well. He ended up finishing 7th overall.

< < < Matt Carstens of Whitefield, New Hampshire gets set to cross the highway outside of Duluth. Later at Billy's checkpoint, he sets his dogs down for a rest even though it was early in the race.

Jess Allen originally hails from Murray Bridge, Australia but has been living in Manitoba Canada in order to pursue her sled dog racing passion. Unfortunately Jess was one of many teams who had to withdraw because of the inclement weather. > > >

< < < Eric Morris from Port Wing, Wisconsin finished half the race but withdrew at the Poplar Lake Trail Center.

Jennifer Freking of nearby Finland, Minnesota was a early race favorite. She finished #2 in the 2005 race and was named "Rookie of the Year."> > >

< < < Here Jennifer holds up her hand indicating to her Dad that she thought she broke her wrist in an accident earlier on the trail. To the disappointment of many fans, it turned out she was right and had to withdraw at Billy's checkpoint.

After a break at Billy's checkpoint, John Stetson of Duluth and his team get off to a roaring start. Check out the Day Glo orange booties on these guys! John finished #2 overall and was the 2006 winner of the half-marathon. > > >

Crossing guards man the road crossing near Two Harbors. The race depends upon hundreds of volunteers like this working shifts throughout the day and night. > > >

As we were following the progress of the full marathon, we didn't have any pictures of the mid-distance competitors. 45 teams competed in this event; Don Galloway of Makinen, Minnesota was the winner.

Follow our Hunt for the
Best Burger
in Duluth, Minnesota