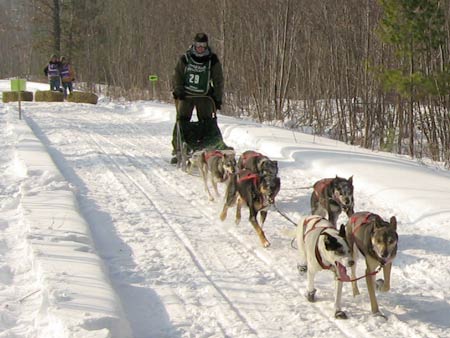 Dawn Breedlove of Bryant, Wisconsin was the winner of the 6 dog class marathon

Get Lodging for the Marathon Here

While the John Beargrease Sled Dog Marathon is the longest and most physically demanding sled dog race in the lower 48 of the United States and a warm-up for the famed Alaska Ididerod, the Apostle Islands Dog Sled Races are a fun family affair and a training ground for those who one day may run the Beargrease.

There are four racing divisions. At the top is the 8 Dog Class (recently changed to 10 dog race teams) which is an 80 mile race over two days (actually two 40 mile races with the best combined time winning). Next in difficulty is the 6 Dog Class, a 60 mile (two 30 mile) race over a shortened version of the 40 mile course. Next in difficulty is the Sportsman Class, a 40 mile (two 20 mile) race, also with 6 sled dogs. Then there is the Family-Recreational Race, an 8 mile loop run each day of the marathon. The Family race has no specification on # of dogs; they varied from 3 to 6. In some ways the family race was the most fun because there were some "little tyke" racers out there getting what appeared to be their first taste of competition.

Be a Sled Dog Race Volunteer. Interested in volunteering to help out with the race? The Bayfield Chamber is offering a special Sled Dog Voluntourism package to encourage you to help out.

The rigs used to transport dogs and sleds ranged from trailers pulled behind pickup trucks to specially equipped RVs that housed dogs, people, and sleds. > > >

Young Emma Thiel of Bayfield, Wisconsin gets a last minute pep-talk before the race. > > >

< < < Off she goes, well bundled against the elements, to begin the big race. Emma finished 4th in her sled dog class.

John Thiel (Emma's brother?) competed in the Sportsman Class. John looked like he was enjoying the ride; he had a big smile and hello to me as he passed. > > >

James Methven, Mason, WI, coming down the last hill before the home stretch. James finished 4th in the 6 Dog Class. > > >

< < < Greg Johnson, Bryant, WI, finished second in the 6 Dog Class to fellow Bryant musher, Dawn Breedlove (pictured at the top of the page) who finished first.

Susan Serafini of Hancock, Michigan, gets off to a roaring start. Susan won the Sportsman Class race. > > >

< < < Here Susan is on the home stretch towards the finish line. Note the lead dogs. Not the same pair who were in the lead at the start of the race.

Truman Obermeyer, Calumet, Michigan, on the home stretch towards the best time in the 8 Dog Class. Truman was also total time leader so he won the marathon trophy. In the backgound is second place finisher Mark Levitski of Bryant, Wisconsin. > > >

More info on this year's race

Visiting Madeline Island in the Winter via the Ice Road.