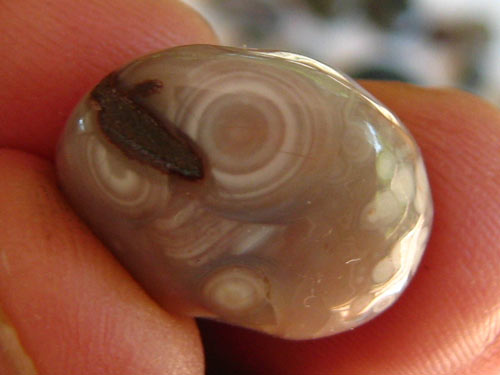 In a previous page, Part 1, I offered pictures and descriptions of common beach rocks found on Lake Superior beaches. In a seccond page, Part 2, I show some beach rocks & minerals, and some agates, that can be polished into attractive gemstones. In this page, Part 3, I continue to show and describe more varieties of rocks and minerals that make attractive gemstones. I also show here some recent agate finds and some agate-wanna-bes that some will mistakenly identify as an agate.

My identification and descriptions rely on a variety of sources, all of which are listed in the recommended agate & beach rock books section at the bottom of this page. The book "Rocks & Minerals" by Bob and Dan Lynch was particularly helpful because of the huge amount of color pictures of various specimens. The "Lake Superior Rock Picker's Guide" by Kevin Gauthier and Bruce Mueller provided some helpful supplementary information, as did my reference books by Susan Robinson and Sparky Stensaas. Karen Brzys booklet on "Understanding and Finding Agates" was helpful in identifying true agates from agate first cousins or agate wanna-bes.

Clicking on the small images shown here will bring up a larger view in a separate window. By the way, if you want to print out any of these larger images, just *right click* on the image and choose "copy image" to copy it to your hard drive. Once there you can click on it and print it out.

I initially thought this was a water level agate but because the bands appear more opaque rather than translucent I think not. The bands are formed like they do in an agate but the crystals of the bands are so small they are opaque.

Here's another example of a banded rock that isn't an agate. Quartz has filled a seam in a basalt rock.

Here's three quartz occlusions where jasper has been fused with quartz with some agate-like banding around the margins. Some would consider these true agates.

Here is another example of opaque bands formed in a metamorphic rock. Gneiss is abundant in the Upper Peninsula beaches.

Here we have translucent bands alternating with some that look more opaque. However from what I understand exists with a true agate, the bands are too broad. So I'd say this is another wanna-be.

I believe these specimens are prehnite. The specimen on the far right may have some copper staining.

These rocks are Jasper, a microcrystaline form of quartz that has been stained, usually by iron ore. The rock on the right is Jasperlite with bands of iron ore.

This Jasper rock has calcite inclusions.

These banded rocks are slate, another metamorphic rock. Originally a layered sedimentary rock but was later subjected to heat and pressure to fuse the layers together. Slate are smooth and usually flat. Make good skipping stones.

I think these interesting rocks are chert.

Part 2. More pictures and descriptions of other types of rocks found on Lake Superior beaches plus a few pix of Lake Superior Agates.