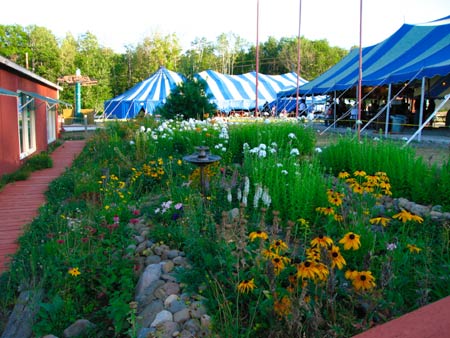 Beginning its 35th season in 2021, the Lake Superior Big Top Chautauqua * show is held at the base of Mount Ashwabay Ski Area a few miles south of Bayfield, Wisconsin. Resident musicians and performers provide the core of summer season schedule yet practically every week some shows feature nationally known artists like . . . Willie Nelson, The New Christy Minstrels, The Bodeans, and Don McLean. 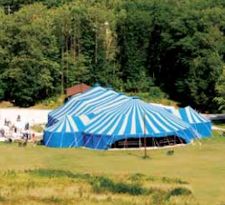 Some of the big names scheduled for the coming season include Brandi Carlile, Three Dog Night, Merle Haggard, Buddy Guy, Emmy Lou Harris, BoDeans, Gaelic Storm, and Home Free . . . to name a few. Warren Nelson was the founder and for 25 years the co-creative director and MC of the show . . until his retirement. Warren Nelson & Friends returns this year as a performer . . with a new show.

My wife Jo and I had a brief history with Warren in the late 1970s when he lived in Mazomanee, Wisconsin and his Lost Nation String Band played at the ski area we managed (Tyrol Basin Ski Area). So we had a special reason to look forward to hearing Warren and the band play again. At least one of the members of the current Big Top Blue Canvas Orchestra - Cal Aultman - goes back to those Mazo days with Warren.

While the show was great, the pleasant surprise was the pre-show atmosphere with people enjoying food, beverages, conversation and an easy ambience. It is well worth arriving an hour or two early to enjoy this part of the event.

The Big Top dinner fare isn't your usual concession food. BBQ ribs, grilled chicken, fish boil, bratwurst, and sandwich wraps are among the dining choices prepared by volunteers with the Mt. Ashwabay Outdoor Educational Foundation. And if you've already eaten, snacks like fresh popcorn, are also available. A variety of beverages are offered - from soft drinks to wine to local and domestic beers.

Food and Fun Before the Show

People stroll the grounds or relax at a picnic tables, frequently meeting old friends and catching up on the news. > > >

< < < These comfortable benches are sprinkled throughout the grounds.

Not your typical event concession food, dining at the Big Top is part of the experience (prices reasonable too). And made even more exceptional because Leinie Creamy Dark was on tap !
> > >

< < < The Gift Shop has some neat souvenirs, good quality articles of clothing, and some hard to find items like the Stormy Kromer hats - a woolen winter cap popular with Lake Superior loggers "invented" by Stormy and his wife Ida in 1903.

See our article and pictures on taking the Stormy Kromer Factory Tour.

Here is where we should be showing you some shots from the performance but my compact camera and flash was not up to the task (unless you want to see some pictures of the backs of seats and heads!). Our seats were near the back but we could still see the stage and the sound was decent. But here's a few shots courtesy of the Big Top website photo gallery that will give you and idea:

While Warren and his friends favor old tyme, folksy, banjo & guitar picken' music, the guest artists performing throughout the season cover a wide range of the musical spectrum. And not each show performed by the Big Top players are identical. They come in a variety of flavors, some mixing comedy and music and some featuring multi-media productions.

During the off-season, the Big Top Show is on the road presenting performances throughout the upper midwest. You can also hear the Big Top on Tent Show Radio