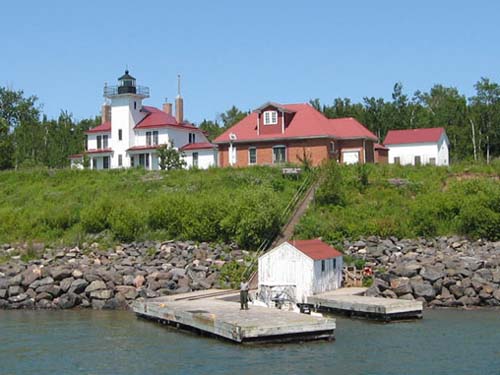 Previously we had taken Apostle Island's Cruise Service boat tour of the Apostle Islands Sea Caves and Devils Island. In that cruise when we went by Raspberry Island we could see the repair of the lighthouse was still in process. Having heard it was now restored to its former grandeur by the National Park Service, we decided to take the special Park Service tour. The park staff, in conjunction with the Apostle Islands Cruise Service offers regular guided tours of the lighthouse. The cruise service shuttle boat operates four days a week from the last weekend in June to the first week in September. The trip to the island takes about an hour. You are on the island for two hours, most of that time is spent on the guided tour of the lighthouse and other structures at the facility.

We caught a Sunday afternoon lighthouse tour the first week in July. The boat ride was fun and the lighthouse tour interesting. The total cost of the round trip boat ride and the tour is about $45 per person. Part of the fee goes to the National Park Service to support maintaining and improving facilities on the islands. In case you are wondering, the cruise ship has bathroom facilities and offers soda pop and snacks for a reasonable price. These two bits of factoids are important because there is no bathroom open to the pubic on the island nor is there any water or food available on the island. Taking a small backpack for drinks and snacks on the island would be a good idea.

< < < For our trip, we sailed on the "Bayfield Express." It has an open upper deck and an enclosed lower deck. On the way out to the island we enjoyed the sea breezes of the upper deck. There are two bathrooms on board and a modest offering of beverages and snacks.

On the way to Raspberry Island, we passed by Basswood Island, Hermit Island, and then Oak Island. > > >

< < < Every direction you could see sailboats enjoying cruising among the islands.

Camping in the Apostle Islands

On the way to Raspberry Island, we made a stop at Oak Island to drop off a couple who would be camping on the island for five days.

Eighteen of the twenty one islands are set up for camping with basic campsites that are reserved in advance. Some of the islands also allow wilderness backcountry camping in certain zones. Learn more here - Apostle Islands Camping.

Arriving at the Raspberry Island Lighthouse

< < < After an hour's ride we arrived at Raspberry Island. A few visitors who had arrived via private boats were just leaving as we arrived.

The Lighthouse and Keepers Quarters are on the left. The building on the right originally housed the steam boiler that powered a massive fog horn.

< < < There's about ninety steps from the dock to the Lighthouse grounds. Before the tramway was installed the Light Keeper and/or his assistants had to carry tons of supplies (bags of coal for the boilers, food, equipment, etc. ) up these stairs from ships at the dock.

In 1906 the lighthouse was substantially remodeled to provide more adequate housing for the light keeper and his assistants.

The guided tour includes all the rooms in the Lightkeeper's residence along with a narration of the daily lives of the keeper and his family as it was a hundred years ago. The furnishings are either originals or antiques that resembled the original furnishings.

The dining room was a multi-purpose room. In addition to dining it was an office for the lightkeeper to keep his records and a sewing room for his wife. > > >

< < < You do get to climb to the actual light tower where you get a great view.

The Fresnel Lens that powered the actual lighthouse light sat on this pedestal. As it burned kerosene it required daily cleani ng as well as did the windows of the cupula that contained the lens. The original Fresnel Lens is now on display at the Madeline Island History Museum.

Map of the Apostle Islands

Things to see and do on Madeline Island