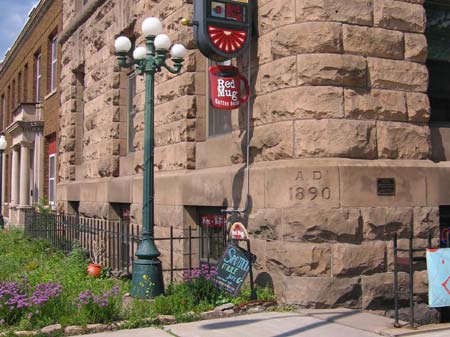 The Red Mug Coffee House is located in the garden level of an 1890
historical record building
on Hammond Avenue in Superior, Wisconsin

Our first stop was at the Thirsty Pagan Brewery, a brewpub that succeeded the old Twin Ports Brewery in 2006. The building is a former creamery and became a brewery in 1999. Yet the interior, including some old time beer murals on the walls, give the appearance the pub had been operational for sixty years or more. An interesting factoid we discovered after our visit was that Twin Ports Brewing began at the Choo Choo Pub & Grill, another Superior hometown favorite we are profiling here.

Two blocks away from the Thirsty Pagan (at the corner of Broadway & Tower Avenues) is the Red Mug Coffee House (at the corner of Broadway & Hammond avenues. Like the Thirsty Pagan, the interior of the Red Mug is eclectic and gives the appearance the operation has been at this location forever. While quality coffee and expresso is their signature offering, the Red Mug serves a decent breakfast and lunch menu of pasties, cereal, soups, sandwiches, and salads. A selection of craft brews and wine is also available. Music and an art gallery add interest and atmosphere.

A more recent candidate for best burgers in Superior is the Shack Smokehouse & Grill. Our first sample of their standard burger passed the test. We look forward to returning to try some of their specialty burgers. See our review near the bottom of this page.