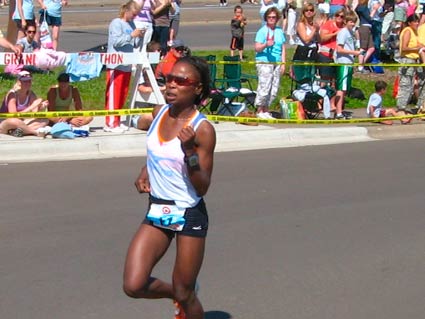 Typically held the third weekend in June, Grandmas 2022 Marathon Run will celebrate its 46th race. As Dick Beardsley states in the official marathon website, the event is "more than a 26.2-mile race – it’s a celebration of running, live entertainment, fabulous food and activities for the whole family."

- See Photos and Race Results
from the 2017 Grandma's Marathon - 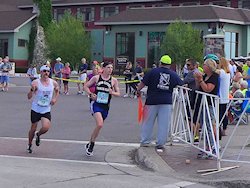 Duluth, Mn Travel Events - things to see and do in Duluth.

I'm no expert on marathon runs but I would have trouble imaging a more beautiful site and day for a run than we experienced when we covered the 2008 race race. The race starts in just outside of downtown Two Harbors, Mn and then follows the North Shore Scenic Drive (old highway 61) along the lakeshore to the city of Duluth where the course continues near the lake until the Rose Garden where runners then go through downtown Duluth to the old railroad Depot cross the bridge and follow the course to Canal Park where the finish line is on Canal Park Drive by Little Angie Cantena. (see the interactive course map)

In 2008 over 12,000 runners participated in the full (7,103) and half-marathons (5,485). We didn't get a number on the spectators, yet 40,000 wouldn't surprise me at all. At every conceivable point along the 26.2 mile course crowds of people were camped out in lawn chairs, blankets, or just standing cheering on the competitors as they passed. In addition to the two traditional marathon races, there was also a wheelchair marathon that drew 46 entrants and 25 finishers. South Africans Krige Schabert and Ernst Van Dyk finished #1 and #2 with only 2 seconds separating them! Amanda McGrory of Palo Alto, CA was the winner in the women's wheelchair division.

Every intersection along the 26.2 mile marathon course drew crowds of spectators like this one near the Stoney Point community along the North Shore Scenic Drive. > > >

< < < Wheelchair Racer Marcelo Ordaz-Cruz 10 miles out of Two Harbors. He finished #13 overall. Wheelchair racers started 5 minutes ahead of the runners and as they generally race at a faster pace, they have the course to themselves.

Wheelchair Racer Gary Debuhr (left) in a tight race at the 10 mile point.

5 minutes later the pack of runner race leaders appeared. Two of the leaders here, #28 and #23, did not finish the race. #6 is Kenyan Lamech Mokono (running in second place here) who was the eventual overall marathon winner. Fellow Kenyans Benson Cheruiyot (#3) and Cyprian Kiogora (#24) finished third and ninth respectively.

A race official watches as John Mirth of Platteville, Wisconsin makes the turn towards the finish line. John, 46 years old, was the Senior Mens Champion and finished 24th overall.

Lots of excitement at the finish line.

Duluth favorite daughter Kathleen Monaghan finished #11 overall among women racers and was #3 among women master runners (age 40 and over).

During and After the Race

Volunteer therapists tend to racers aching muscles and joints in the Medical Tent.

A festival atmosphere surrounds the race.

Festival goers in the Beer and Food Garden can keep an eye on the finish line on the mammoth big screen TV.

< < < Country music in the entertainment Tent. 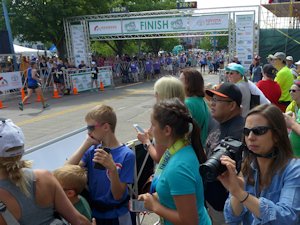