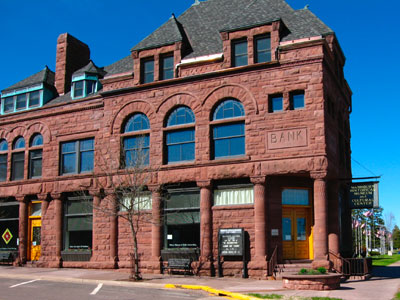 The Bayfield County seat, the city of Washburn is midway between Ashland, Wisconsin and Bayfield on Chequamegon Bay of Lake Superior. The town was founded in 1883 as a lake port for the Chicago, St. Paul, Minneapolis and Omaha Railroad. In 1896 it became the seat of government for Bayfield County.

Washburn Woodcarver and
more things to see and do

Bayfield, WI Attractions
Links of things to see & do

In addition to being the county seat and a Lake Superior port city, its growth was fueled by its mature forests and abundant sandstone, called brownstone, used in numerous buildings including some prominent architecture in Minneapolis and Chicago. Several historic brownstone buildings remain in the city, including the 1890s Washburn Cultural Center shown above.

The town offers antique and artisan shops, and decent shopping for groceries, hardware, gas, and amenities one would expect of the county seat. Perhaps its major tourist attraction are a pair of lakeside parks and campgrounds on either end of town: Memorial Park and Thompson's West End Park. The two parks are joined by a scenic lakeside hiking trail. We have camped at each park and like them both; each has its strengths. 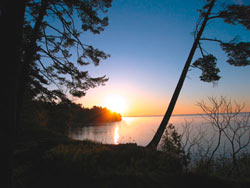 Early in the morning the sun rises over Chequamegon Bay as seen from Washburn's Memorial Park campground. > > >

A number of Lake Superior sunrises pictured in these pages were taken in Washburn. 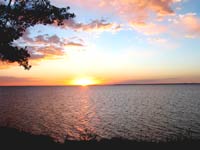 And here is a Lake Superior moonrise as seen from Memorial Park. > > >

Lake Superior Dragon Boat Festival is one of the top midwest dragonboat race and festivals.

Bayfield is the gateway to the Apostle Islands and Madeline Island.

Ashland Mural Walk is an interesting attraction in nearby Ashland,