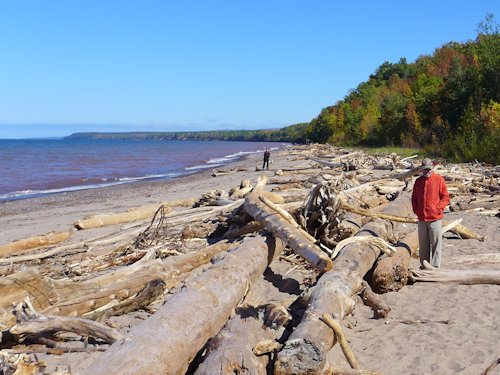 Beach at Black River Harbor after a storm

The picture at the top of this page gives you an idea of the power of Lake Superior. These logs and debris weren't there when we walked the beach in mid-July but by mid-September here they were. Along with the logs, you can expect a fresh batch of rocks also came ashore.

Most of the beaches in the Wisconsin part of Lake Superior are sandy with not many rocks or the variety of rocks you find along the Minnesota North Shore or in the UP. Additionally park policy against removing rocks eliminates all of the Apostle Islands National Park lands from consideration. And finally there are some large stretches of shoreline along the Wisconsin south shore that aren't accessible to the public. 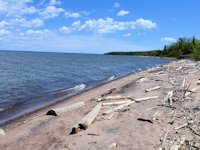 There is a small roadside pull-over/rest stop located 6 miles west of Port Wing, Wisconsin on Highway 13. The beach is a short walk down the hill. We've only briefly "picked" this beach two times while stopping here for a lunch break and not found any agates. However I like the look of the beach and its rock population so I think it has possibilities. 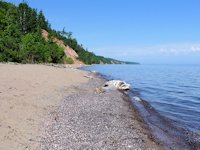 The turn-off onto Highway 122 is 12 miles west of Ironwood, Michigan. There is a county park sign at the turn-off. This beach was recommended to me by an avid rock hound and agate collector. I need to spend more time on it . . . and get some pictures! One reason we too often bypass this beach is Little Girl's Point (a premier rock hound beach) is only 7 miles east of here. But as it is the "road less traveled" the Saxon Harbor Beach is worth a good look. 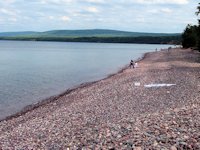 If you are coming from the west turn at the same corner with Highway 122 as to the Saxon Harbor beach only continue 7 miles past Saxon Harbor going east. From Ironwood, MI it is 17 miles north on Michigan Highway 505. Little Girls Point might have more collectable tons of rocks than any other Lake Superior beach! 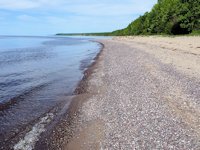 Follow Highway 505 from Ironwood going north, but turn right at Airport Road to intersect with Highway 513 (Black River Scenic Byway) and turn right til you get to the harbor parkway. It is about a half-mile walk to the beach. We've had good success on this beach and it is the site of my first agate find! See our recent article on finding beach rocks and agates at Black River Harbor. 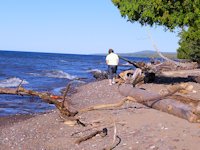 There is a smaller beach area accessible from the campground by a set of stairs. The other area is at the tip of the island at the mouth of the river. Would rate this as only a middling agate beach, but the Presque Isle River waterfalls and river views are quite scenic so it makes the trip to the area worthwhile. And as a bonus you might score an agate or a collectable rock. This is part of Porcupine Mountains State Park so you'll need a vehicle sticker. 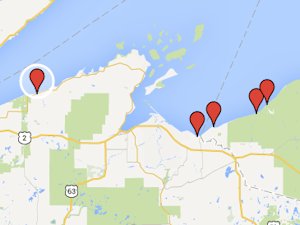