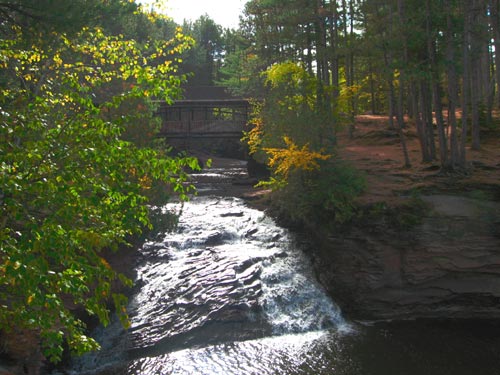 
Wisconsin Waterfalls on this Page:

Our waterfall trail along the Lake Superior watershed begins south of Superior, Wisconsin at Pattison State Park, a Wisconsin campground with hiking trails and the state's highest water fall. The route then heads back north and a little east of Superior to Amnicon Falls State Park. . . then to Bayfield, Ashland and Hurley. Several impresive water falls exist along this route.

Is about 15 miles south of Duluth-Superior and located in Wisconsin's Pattison State Park. Big Manitou Falls, to the right, is Wisconsin's highest waterfall at about 165 feet. While the falls is impressive, the park needs to cut a trail (or construct a staircase) down the side of the canyon to allow a closer view.

Is about 15 miles east of Duluth-Superior and located in the Wisconsin state park of the same name. A pretty little park with nice picnic areas. The river has several cascades in addition to the waterfalls. The water levels were down in these pictures as it was the fall of the year.

Some scenes upstream and downstream of the covered bridge.

Morgan Falls is about 20 miles south of Ashland, Wisconsin. It's a pretty little falls that empties into a pool that begins Morgan Creek. > > >

A much more enthusaistic hike can be had by taking the side trail to St. Peters Dome. It looks north towards the Bayfield Peninsula. On a clear day you can see Lake Superior.

Copper Falls. Just north and east of Morgan Falls near Mellen, Wisconsin is Copper Falls State Park, which has two waterfalls and some decent hiking trails. (Pets are not allowed on the main falls trail, but are OK on one of the other trails.) See more information here.

Wisconsin Parks Pet Unfriendly Policy.
This brings up a bone we have to pick with Wisconsin parks officials. We've traveled extensively in state and provencial parks - in Alaska, Minnesota, Michigan, Alberta, British Columbia, Ontario to name a few - and rarely - if ever - have we encountered bans against dogs on the hiking trails. And in all the mega-miles of hiking, I have only seen one incident of "doggie poop" on a trail. Apparently the people who run Wisconsin parks don't understand that hikers who have dogs as hiking companions make sure they aren't a nuisance to others.

Potato Falls . . .About 15 miles east of Ashland near the town of Gurney, there are two sets of falls on the Potato River, the last one dropping about 90 feet. The fall waterflow was down so I am looking forward to catching this one again in the spring.

Superior Falls . . . is on the Montreal River that forms the border between Wisconsin and Michigan's Upper Peninsula. It's a short paddle from Lake Superior and is listed as a 90 footer. The hiking trail past the power plant is rather unscenic. For the fall of the year, the Montreal still carried alot of water, which explains the power generating station.

Saxon Falls . . . is upstream a few miles from Superior Falls and on the Montreal River and another 90 footer. It is also near a power plant, but there is no hiking trail to the falls. I had to play mountain goat working my way down the canyon walls to get this shot.

Apostle Islands Sea Caves Hiking Trail is about a 3.5 mile round trip from Meyers Beach.