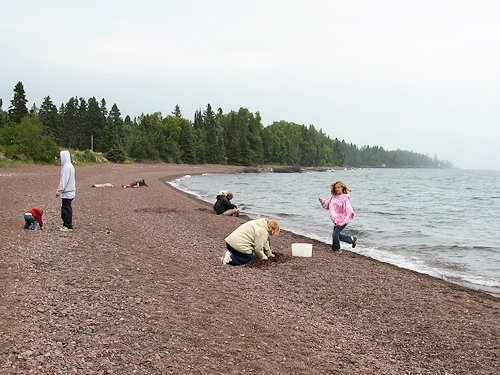 See our Agate Hunting Tips lower down this page

Veteran Agate Hunters will troll gravel pits, riversides, hiking trails, roadsides, as well as beaches looking for agates. We stick to beaches, not because the chances of finding an agate are better, but because there is something unique about being close to Big Gitche Gumee (Lake Superior), listening to the waves lapping the shoreline, feeling the crisp breeze coming of the lake, breathing the fresh air, and getting some exercise walking along the shoreline.

We've got a few favorite beaches, some where we have had good luck, but also we like some better than others for the scenery or the variety of rocks and stones that litter the shoreline. Little Girls Point near Ironwood, Michigan is one of our favorites. It has perhaps more rocks per foot than any other we've encountered around Lake Superior and it has a decent variety of rocks as well. Another plus is it has several lakeside RV campsites which if you are lucky enough to reserve one means the beach is right outside your back door. Jo has a soft spot for the beach at Muskallonge State Park because there she found her first four agates in two days of beach combing. Grand Marais Michigan is another favorite, offering an extensive beach with lots of variety of rocks and a reputation for some huge agate finds. The Woodland Park campground is adjacent to the beach. Grand Marais is also home to the Gitche Gumee Agate Museum, a must see stop for any agate fan. But next year, we may find an agate at a previously less favored beach and declare it as our new favorite, for there are so many beaches that we've only touched upon briefly.

Our rock picking beach guide and reviews are organized into four regions. We've omitted beaches in Ontario because most of the best beaches are in their provincial parks where the official policy is "no rock picking." The US National Parks are also off-limits for rock picking.

Lower down this page are some recommended books on Agate and Rock Collecting that contain some tips for finding agates and for identifying their charactertistics. Karen Brzys, curator of the Gitche Gumee museum, also has an interesting CD tutorial that she maintains will "train your eye" to finding agates.

1. Often times the agate will have at least part of it disguised by a rough brownish, pitted husk that is not at all attractive. Learn what these husks look like because when you spot one, it may be worth turning it over where it might show its agate nature.

2. Morning and late afternoon hunting can be better than the middle of the day. Do your most concentrated hunting with the sun at your back.

3. While I like to search the wet rocks at the water's edge and just under water, many veteran agate hunters put the majority of their effort into searching the dry rocks, looking for that tell-tale glint or sparkle of reflection from an agate seam.

4. Another successful strategy is excavating, digging down through the layers of rock piles, versus walking miles (as I usually do). This is particularly good plan when there have been lots of other folks trolling the beach before you or at the same time as you.

5. If there has been a big storm with high waves or a period of very strong waves washing lots of rocks ashore, try to be the first one on the beach when the weather clears.

6. Agates are usually formed in vesicles or holes in a larger host rock. So their shape will often be a somewhat elongated or roughly shaped ball. They'll not be flat, nor have sharp corners, or be angular in nature.

7. This tip is particularly hard for me to follow. Watch out for the pretty rock syndrome. On the good beaches, there are many kinds of unique, attractive, and quite collectable rocks that when tumbled will make attractive gemstones. So if you spend your time picking up every interesting rock you come across, your agate-finding percentage will go way down.

8. If all other factors are near equal, the beach that is most inaccessible will yield the best results. Agate hunters, like fishermen, have their favorite secret fishing holes - the lake hardly anyone else knows about or takes the trouble to get into.

Check out the books below for many more tips on Agate and Beach Rock hunting and collecting.

We were there at the 2021 13th Annual Rock On Agate Festival in Grand Marais, Michigan.