The Mural Walk in Ashland, Wisconsin 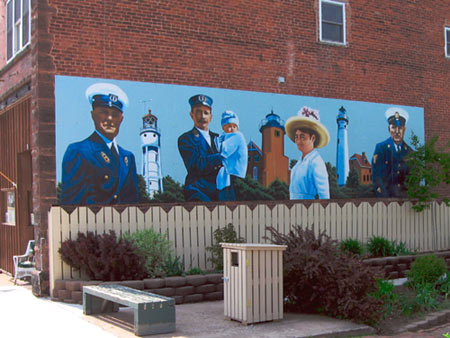 The Lighthouse Mural - Ashland Wisconsin
This mural depicts the 3 lighthouses located within the Apostle Islands
and their lighthouse keepers.

We enjoy strolling down Ashland's downtown main street because the old buildings have been preserved and it remains the center of their retailing district - mega strip malls on the edge of town have yet to spoil Ashland.

An entertaining additional benefit of getting out of the car and walking around downtown is finding the more than a dozen historical murals that have been painted on the sides of selected downtown buildings.

< < < The Aspah Whittlesey Mural depicts the founder of Ashland and other early settlers in front of the Ashland State Bank as it existed in 1892.

< < < The Lumberjack Mural depicts 22 of the thousands of people employed in logging camps in and around Ashland during the lumber era.

The Storefront Mural depicts 13 retail, banking, and entertainment establishments from Ashland's past. > > >

< < < This mural honors men and women from Ashland who have served in the Armed Forces.

The Aviation Mural celebrates Ashland's early aviation history and a few of its contributors. > > >

Ashland seems to be adding more murals every season. Here are some more recent ones. See more Ashland Murals here.

Things to Do in Bayfield WI