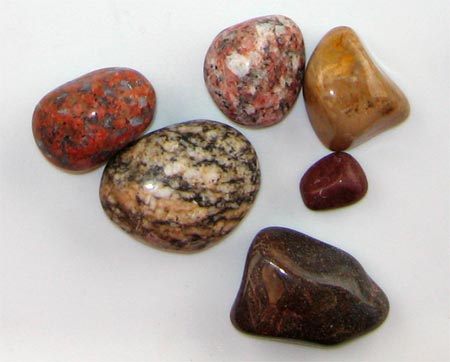 Some of my polished "Easter Eggs" from Lake Superior

After countless hours combing Lake Superior beaches, I've accumulated hundreds, perhaps thousands, of rocks and potential gemstones. Only recently have I found the big prize, a lake superior agate, but I've managed to collect a number of very pretty specimens of other formations. Some of these are shown below.

As beach rock collectors know, viewed in the water, Lake Superior rocks are quite colorful. But after collected and the rocks dry, a rather drab transformation takes place. But hark, the color and lustre can rise again . . . with help from the skillful use of a rock tumbler.

Shown below are samples from my first batch, including illustrations of mistakes made during this apprenticeship!

See more Agates and some advice on using tumbling pellets to tumble and polish agates.

Rock Tumbling with a Vibratory Tumbler
Stage 1: Roughing or Grinding

< < < Here's some of the rocks prior to tumbling. After the first step of tumbling, many of the rocks shown in the photo to the left had to be set aside to be processed at a later date with another batch of rocks. Reason? Had difficulty interpreting the instructions from the tumbler manufacturer as well as from the "authoritative tumbling guide" my wife purchased. While I ran several 12-24 hour cycles, removing excess mud and adding water as appropriate, I didn't realize that the Silicon Carbide grit breaks down over time and thus the batch must be re-charged every 12 -24 hours with fresh grit (grit size 200). A tip I will try next time is get acquainted with the "feel" of the mud between my fingers when the grit is still working vs. how it feels when it has lost its abrasive power.

I also learned that at this first stage, called Grinding, that a Rotary Tumbler generally does a better job of shaping very rough rocks and rounding off sharper edges. But we shall see how my Vibratory Tumbler does when I use it correctly!

Here's a batch of rocks *after* the first tumbling stage: Grinding. Those that were not sufficiently smoothed were set aside to be processed at a later date. > > >

My mistake at the first stage set me up to make another error at this stage. With my Vibratory Tumbler (Brand Name Lot-O-Tumbler), the process at this stage is very similar to stage 1, except a finer grit (600) of Silicon Carbide is used. My manufacturer instructions ordered 1/2 TEAspoon of 600 grit; the Tumbling Book said 1 1/2 to 2 TABLEspoons. Because my first mistake had me under processing my rocks, I decided to go with the Tumbling Book recommendation of 2 TABLEspoons.

Mistake #2. Here's why & what. The much finer 600 grit allows much more rock to rock contact during tumbling and this is especially so in a vibratory tumbler. So although my rocks were smoothed to the desired state at this stage, the more violent vibration action that occurred because of the excess amount of grit fractured some of my nicest specimens!

See the fractures in the examples to the right. > > >

So at this second stage of tumbling, if additional cycles are needed to achieve the dull glossy appearance sought, one needs to be cautious on the amount of grit to use in the recharge. Also on materials subject to fracture, additional water should be added to cushion the action.

**I recently had another explanation of the cause of these fractures from Tom Stockwell of UncleTom's Rock Shop. Tom thinks these can occur when the mix of rocks contains an improper ratio of small and larger rocks, particularly not enough smaller rocks in the mix. He recommended I try some commercial pellets that are about 3/8 inch diameter having them comprise about 2 lbs of the normal 4- 5 lb load. This will promote both cushion the rocks from more violent vibration plus obtain a more uniform roughing and polishing. Can't wait to try this out and will report on the results.

Silicon Carbide is not used for final polishing. My tumbler came with Aluminum Oxide as the recommended polishing agent. There are also special polishing agents developed for rock tumbling. At this stage, I again encountered a difference between my manufacturer's recommendations and the Tumbling Book. This time I went with the manufacturer's more conservative 1/2 TEAspoon vs. the 1 1/2 TABLEspoon the book advised. I finally completed one stage without a casualty.

Here's a couple of close-up shots of rocks from pre-tumbling to after polishing.

In addition to having a nice lustre, the tumbling-polishing process brings out previously hidden tones in the rocks surface. Look closely at the blow-up versions and I think you'll see what I mean. > > >

None of these are Agates, but each is a one-of-kind "purty rock" that in the hands of a expert rock tumbler and stone cutter could've made a nice centerpiece in a handsome work of gemstone jewelry.

Rob Abram recently wrote me about how he and his son are enjoying collecting beach rocks and polishing them. Ron too found that in the Lot-O tumbler a half teaspoon of grit is sufficient, except for the first or roughing stage that does require more. He sent along a picture of some of the beauties they've found and polished.

Rob also recommended a forum for Rock Hobbyists that he has found especially helpful. https://andy321.proboards.com/

I've got some new agate pictures and a report on using tumbling pellets here. The agates in this batch were from a trip we took to the Keweenaw Peninsula and later on the beach at Muskallonge State Park.

See more Agates and some advice on using tumbling pellets to tumble and polish agates.

The Continuing Quest for a Lake Superior Agate

From seeing Agates in the rough at the Agate Museum, reading Karen Brzys' excellent book on Finding Agates, and cruising lots of beaches I think I have a better idea of what one might look like in the rough and where to hunt for them. I also managed to hook my wife on the hobby so now we have two sets of eyes, feet, and hands digging around Lake Superior beaches. We'll also get out there early in the season while the pickin's are still fresh.