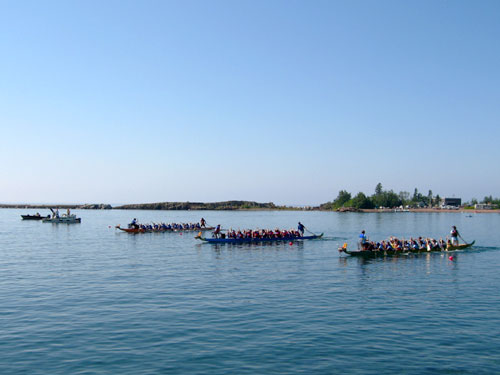 DragonBoat Racing as the name implies is an import from Asia that has become popular in the US and Canada as a great team-oriented water sport that also raises money for community non-profit organizations and provides a good excuse for a festival. Below are photos and a video from the 7th annual Grand Marais North Shore Dragon Boat Race and Festival.

In a Dragonboat event there are generally several race divisions or brackets as the teams range from a group of friends and novice paddlers to world class athletes who train rigorously for the event. Every team of 20 paddlers must have a minimum of 8 women paddlers. In addition to the 20 paddlers, there is a helmsman-steer person and a drummer. Some teams are comprised of all women. For example we saw the Birkie Girls compete at Grand Marais and recall we also saw them in an earlier Superior Dragon Boat Race in Superior, Wisconsin. Similar Lake Superior DragonBoat Festivals are also held in Thunder Bay, Ontario, and Sault Ste. Marie, Ontario.

The North Shore Dragon Boat Race is held in Grand Marais' protected harbor. The starting line is near the marina and the municipal campground beach. The finish line is by the downtown beach.

Friday night is opening ceremonies with a parade of the teams and entertainment on the festival stage. On Saturday - race day - activities kick off with an early morning pancake breakfast. Food and Craft Vendors have their exhibits at Harbor Park near the finish line. They open just before the race, which begins at 10 am. There are two heats, one in the morning and second heat in the early afternoon. The bracket finals are a held in the later afternoon. In between the morning and afternoon heats there is entertainment on the festival stage.

Grand Marais Harbor Park - Waiting for the Races to start

A beautiful day for a race and plenty of space on the beach by the finish line for a picnic and watch the race.

< < < Jo shows off one of the official race T-shirts, adding to her collection of dragonboat shirts.

The "Harbor Fiends," "Fired Up Puppies," and "The Otters" dragon boat teams take off at the starting line. The "Fired Up Puppies" won this heat and had the fifth best time for all the heats. The Otters were top finishing all-women's team and were 8th overall out of 18 teams. > > >

< < < This shot gives you a good idea of the arrangement of the teams in the boat. The drummer is in the bow section, then there are 10 rows of two side-by-side paddlers, followed by a helmsman or steer person. Often the steer person is not an official member of the team but a veteran boater who steers for a number of the teams.

Interestingly the grand champion "A Better Dragon" team only has 9 pairs of paddlers plus a solo paddler in the rear just ahead of the steer person, for only 19 paddlers instead of 20. Even though short one paddler, they still won. This team came in second (out of 86 teams) in the 2007 Superior Dragonboat Race so they are serious competitors in the sport. > > >

< < < Passengers and crew of the North House Folk School's sailng schooner Hjørdis watched the race from out on the water.

"Tres Amigos" entertained the crowd during the noontime break between heats. The next day they also performed at the Gunflint Tavern. > > >

< < < When we are in Grand Marais we often stop by the store & office of North House Folk School to check their latest collection of "how to" books for sale and peek in the workshops to see what classes were going on. On my "bucket list" is to take one of their workshops.

Links to other Dragon Boat Festivals

Other things to See and Do in Grand Marais, Minnesota

Other Fun Race Festivals along the North Shore