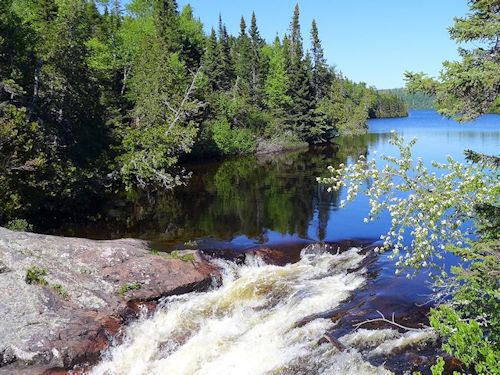 The top of Rainbow Falls as it leaves Whitesand Lake, Rossport Ontario

East of Nipigon to Marathon, Ontario is our favorite part of the Ontario Lake Superior route - at least from the panaroma's you see through the windshield. You are within site of lake most of the route and you travel up, over, and around some impressive mountains (impressive by upper midwest standards!). You'll also have a chance to see two pretty impressive waterfalls - Rainbow and Aguasaban and do some hiking on the Casque-Isles Hiking Trail that runs between Rossport and Terrace Bay.

Pictures Along the Road

Traveling east on the Trans-Canadian Highway between Nipigon and Rossport, Ontario. 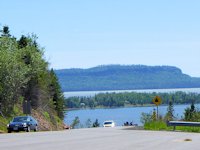 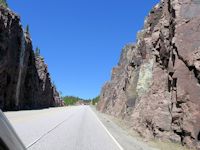 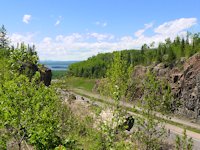 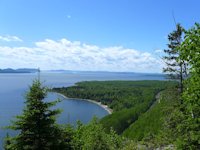 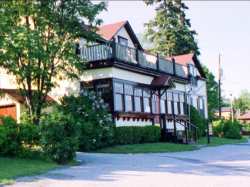 On one of our first Lake Superior Circle Tours, we were attracted to the charm of the Rossport Inn. It has overlooked Lake Superior and the Rossport Islands since the late 1800s. We were camping so we didn't stay there but did have dinner, which was excellent. We know others who have stayed overnight and enjoyed the old fashioned character of the accommodations. The only negative is that has an Inn the formerly served rail passengers, the tracks are right out the front door so you can hear trains come through during the night. 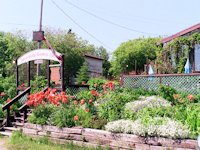 On a later circle tour through Canada, we decided to dine at Serendipity Gardens, a place we'd admired in the past but never stopped in. Like the Rossport Inn, they have a great view of the Harbor, especially from their dining deck. The ambience, service and food here was also first rate.

By the way, the Rossport Harbor & Bay area has sand flats and warm south facing beaches and is well sheltered from wind and waves by a ring of islands. I think these qualities are why it is a popular destination for Sea Kayaking enthusiasts. The village hosts an annual Sea Kayak Symposium the last weekend in June. Quite startling to see hundreds of kayaks populating a bay that usually has a boat or two out on it at a time. 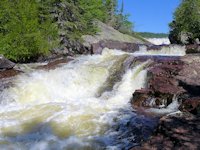 Rainbow Falls is located a few miles east of Rossport in the park by the same name. It is a series of cascading falls that drops well over 100 feet. There are boardwalk stairs, viewing platforms, and a bridge that provide several views of different stages of the waterfalls. The trail along the falls also connects with the Casque Isle Hiking Trail that runs from Rossport to Terrace Bay. 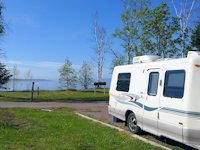 There are two campgrounds at Rainbow Falls. The lower one fronts on Lake Superior. The upper one fronts on Whitesand Lake and provides access to the trails around the waterfalls. 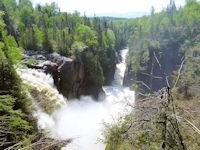 Just past Rainbow Falls, the Trans-Canadian highway moves away from the lake as it goes through the town of Schreiber. It re-connects with the coastline as it passes Terrace Bay and then the town by the same name. 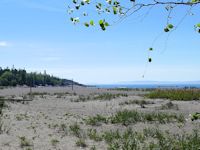 Terrace Bay is quite a bit larger than Rossport and lacking the seaside village charm, yet worth a stop to see Aguasabon Falls. The town also has a nice sand beach on Lake Superior where the Aguasaban River finishes with another waterfalls before joining Lake Superior. The Casque Isle Hiking Trail begins at the Terrace Bay Beach and extends westward along the lake through Rainbow Falls and ending in Rossport. (An amusing sidebar. At the other end of the trail, in Rossport, they call this very same route the Voyageur Hiking Trail!) 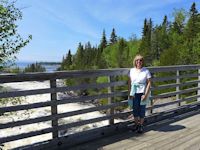 Here is another view of the main falls

The path to the falls is too short to qualify as a hike, so if you want some exercise you need to follow the trail that leads downstream of the falls. Watch your footing because it's an "unimproved" trail and the drop off is steep!

Perhaps 30 km down the road from Terrace Bay is Neys Provincial Park (seen in the distance in the photo to the left) - with some good hiking trails and Lake Superior views. Was a bit buggy the evening we arrived so we hiked along the beach vs a back country trail. The next morning we broke camp early as rain was moving in. Sorry no pixs to share with you - next time circumstances may better favor getting some nice pictures. [In 2005 we had intended to re-visit Neys, but a couple we met at Aguasabon Falls highly recommended Pukaskwa National Park so we went there instead. See Pukaskwa info on this page]

After Marathon, the highway soon moves away from the lake and the landscape flattens. The long stretch of road between there and Wawa is an opportunity to put some good tunes in the CD or an audio book in the cassette and put on some miles!

See our article in ScenicPathways.com for more pictures of Ontario Waterfalls.

Going east of Marathon towards Wawa

Note to US Residents.
Travel into Canada may be restricted due to COVID and varies by Province. Go Here for further information.