Some years at the Bayfield Apple Festival we've had to wear a coat and hat to keep warm. . . . and a hot cup of ARCO coffee was more attractive than a cold beer. But for the AppleFest's 50th anniversary opening day on Friday October 7th, 2011, Mother Nature let the sun come out and the temperature rise into the mid 70s. Ideal weather for a grand old festival celebrating being 50 years old. 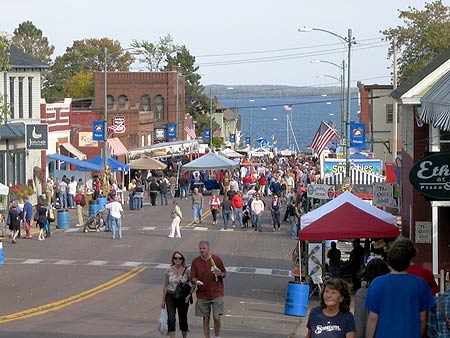 The result of the nice weather and improved publicity through the Wisconsin Dept. of Tourism was a recent-times record of over 60,000 people attending the event, pleasing vendors and festival organizers. On this weekend there was no hint of economic stagnation in this most northern Wisconsin county.

Among the Apple Festival's traditional offerings were the Apple Pie & Dessert contest, the kid's carnival & games area, Big Top Chautauqua's house band performing at the outdoor stage all three days, a number of other performers sprinkled throughout the festival streets, the traditional Apple Peeling Contest, the Grand Parade on Sunday, arts & crafts vendors galore, and over 70 Orchard & Food booths offering fresh apples to take home and apple concoctions of all sorts.

In addition to the traditional festival fare, the 50th Apple Festival featured about 40 Festival Queens from previous years returning to ride in the Grand Parade, a huge Mass Band (over 600 performers) made up from several school bands across the northland, a special Anniversary composition performed by Big Top's Blue Canvas Orchestra, and a return of the special Apple Hats offered by the Bayfield Chamber at its merchandise booths.

Below are a sampling of photos from Friday's festival fun.


~ clicking on photos will bring up a larger version ~ We enjoyed some Leinie Octoberfest at Greunke's outdoor beer garden. Greunke's Inn has been in business since 1940. Inside its walls are lined with photos, signs, and memorbilia from years gone by. They even have a 1946 Juke Box in the lounge. They were packed with no available tables when Jo and I stopped by so we had to sit outside which was finie since it was such a nice day. Their restaurant features a full menu from sandwiches to house specialties. I think most of all Greunke's is famous for its Whitefish Fish Boils. 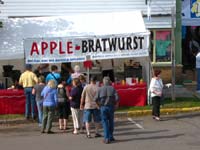 At AppleFest, apple concoctions of all sorts rule. So in addition to pies, desserts, caramel apples, you have apple beer, and apple bratwurst. There was always a line in front of Bayfield Apple Company's Apple Bratwurst stand. I had one with my usual sauerkraut, onions, and mustard condiments. The added flavor of apple worked. Quite tasty. Here's Jo with Apple Hill's 1948 Ford Pickup. That's caramel apples being offered from the bed of the pickup. 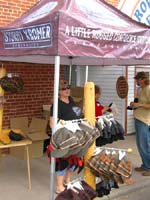 Some good deals on sweatshirts from Up North (right). In addition to the Bayfield merchants, over 150 artisans set up shop at the lakeshore park. 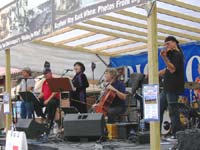 One of our favorite parts of AppleFest is being able to see and hear Big Top Chautauqua's Blue Canvas Singers & Orchestra. In the photo Cheryl Leah performs, with vocal support from Phil Anich, Jack Gunderson, and Band Director Ed Willet. I recorded a great video here that I would like to have shown but the band's amps overwhelmed my video mike causing distortion.

But I can offer a video taken by the Bayfield Chamber of Commerce. (see below)

The Red Cliff Ojibwe Drum and Dance Troup, joined by other visiting Ojibwe, entertained in the lawn of Greunke's Inn. It was really neat to see all ages, from little tykes to grandmas, joining in the traditional dances. The Bayfield Chamber & Visitors Bureau office is conveniently located downtown on Manypenny Avenue. They are the prime sponsor of AppleFest and are an essential stop for the Bayfield visitor to get useful advice, maps, brochures, and information on enjoying the Bayfield area.

New for the 2020 Bayfield Apple Festival

A Farmers Market has been added to the Friday festivities, seating has been added along Rittenhouse Avenue for visitors to relax while enjoying festival foods, and a new entertainment stage is being set-up. For more information, see the links below.