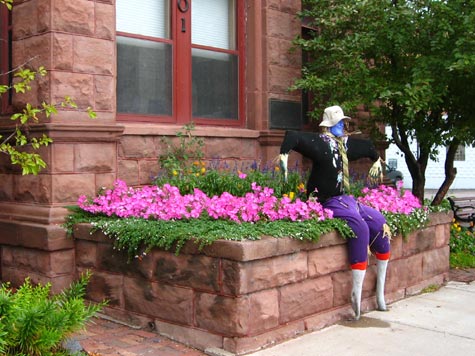 Hitchhiking on a the fall pumpkin and scarecrow festival in nearby Bayfield, Ashland began their own Scarecrow Festival in 2009. Whereas Bayfield's scarecrows were mostly in the orchards around town, Ashland's decorated downtown. The scarecrows add color and fun to walking around downtown Ashland, supplementing a walk around town to see the impressive murals on many buildings.

Each year it seems Ashland adds a few more murals to their interesting collection. More excuses to get out of the car and walk around town!

< < < These 7 murals are snapshots of Ashland from the 1950's. The close up of the 1955 Chevie is a twin of my very first automobile. How often I've thought I wished I'd kept that sweet little car.

At the time of this picture, the Oredock Mural was under construction. It depicts an Ashland landmark, the 1800 foot long concrete oredock, built in 1916 and was the largest concrete dock in the world. No longer in service, it is slated to be torn down so this mural will soon be the best representation of its grandeur from an age when Ashland was a major Lake Superior shipping port. > > >

< < < This mural is in the Ashland McDonald's restaurant and depicts 19th century Ashland bayfront with sail boats and steam powered transports. 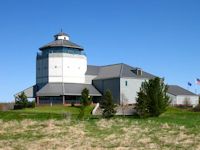 A must see stop for visitors to Ashland is the Northern Great Lakes Visitor Center, located about 2 miles west off of highway 2

Other events and things to do and see in Ashland Wisconsin.