January 14, 2020 The Ice Road is not yet Open for traffic to the island. As of this date there still is some open water.

Madeline Island, the most southern island of the Apostle Islands, is the only one occupied year- round. Once the lake begins to freeze over the car ferry between the island and the Bayfield mainland ceases to operate. For a time while the ice is getting thick enough for traffic, an Ice Sled water taxi (Windsled) allows passenger travel to and from the mainland. The Wind Sled is a large, covered, flat-bottomed airboat that is able to travel on the ice but will float should the ice not be thick enough to support it. 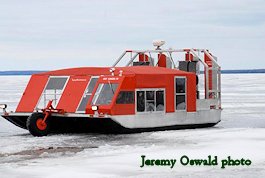 Once the ice thickens enough to support conventional vehicles the Madeline Island Ice Road is officially opened to cars, trucks, and buses. The company operating the Windsled then switches to a large passenger van running on the same service schedule. With both the bus service and private vehicles able to cross the lake, the pace of activity on the island picks up abit. On our visit we found the Bell Tavern open, a grocery-convenience store doing some trade, and a few other places of business apparently operating in the winter. As you might expect, however, many of the homes and B&Bs, and several businesses, on Madeline Island were closed for the winter.

The trip across the Ice Road was an adventure and it was fun to drive around LaPointe seeing how things looked covered in snow. Tom's Burned Down Cafe was closed but the Bell Tavern was open - serving snowmobilers and people like us who traveled across the bay in their cars and trucks. 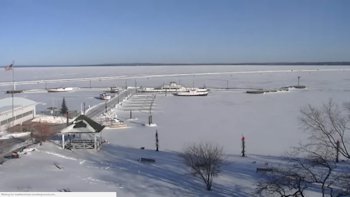 The town Gazebo that normally greets you as you get off the Car Ferry is now covered in snow waiting for spring. > > >

< < < The Post Office remains open (through ice, sleet, and snow!) throughout the winter.

One boat didn't make it out in time to escape the freeze-up!

< < < It will be a few months before Tom's Burned Down Cafe opens for business.

But the Bell Tavern is open all winter long.
On Feb 28th, 2009 Bells hosted a winter performance
of the Big Top Chautauqua Show. > > >

More photos and info about Tom's Cafe and the Bell Street Tavern.

Down at the main Bayfield Dock, several boats are frozen in for the winter. > > >

< < < Here's another view of the Bayfield Harbor from the Ice Road to Madeline Island.

Greunke's Restaurant, famous for its traditional fish boils and fresh Lake Superior Whitefish and Lake Trout, rests for the Winter. It opens in April. > > >

< < < The Bayfield Skyline from the middle of the bay.

More things to see and do on Madeline Island.