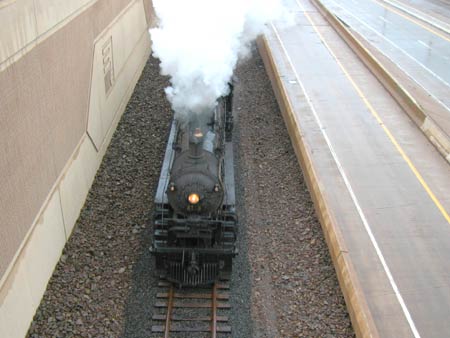 The six hour round trip color tour from Duluth to Two Harbors begins in mid-September and runs into mid-October. There is a two hour layover in Two Harbors. See links at the bottom of the page for more info.

Milwaukee Road Steam Engine 261
See the Video of this classic train as it came into the the Depot on a recent fall visit.

From mid-September to mid-October, the North Shore Scenic Railway and the Lake Superior Railroad Museum sponsor a special color train between Duluth and Two Harbors, Mn. What makes this rail excursion especially neat is that one of the antique steam locomotives from the museum is pressed into service: Steam Locomotive #2719 built in 1923 by the American Locomotive Company (ALCO) of Schenectady, New York. See the photos from our trip below.

Steam Engine #2719 for many years served the Soo Line Railroad pulling both passenger and freight trains, including the popular Pullman Car night train between Duluth and Chicago. It was retired from active service in 1959 and at that time was the last remaining "working" steam locomotive in Wisconsin. It was later restored to service for excursion runs by Locomotive and Tower Preservation Fund, Ltd who has leased it to the Lake Superior Railroad Museum for display and excursion runs.

In 2014 Steam Engine #2719 is undergoing important maintenance and is now on display at the Lake Superior Railroad Museum. In 2019 Steam Locomotive #28 will be pulling the fall steam train excursion to Two Harbors and return. See links to schedules below

The day before the train ran, the sky was blue with hardly a cloud in sight when we stopped by Union Depot to inquire about tickets. > > >

< < < Later when we took a stroll on the Lakewalk, blue sky and warm weather continued.

That evening the weather forecast for the next day was rain and a cold front moving in, so Jo and I elected to chase (and photograph) the train to Two Harbors instead of ride it.

< < < The next morning it was cold and rainy. I waited in the rain for over an hour on top of the tunnel by canal park. Just when I was about to give up I saw the headlight and smoke in the distance as #2719 came chugging along.

We rushed ahead towards Two Harbors and found a railway intersection where we waited for old #2719 to catch up. And there she came . . . blowing smoke announcing her arrival.

< < < Then we raced along scenic highway 61 keeping pace with the steam train and snapping photographs as well as waving to the passengers.

At the Two Harbors Depot

< < < We waited in the Two Harbors Depot and finally the train came - caboose first, having turned around in preparation for the return trip to Duluth.

< < < Both passengers and crew "de-trained" for the two hour layover in Two Harbors before the return trip to Duluth.

While in Two Harbors, we had lunch at the Vanilla Bean Cafe and there talked to some folks from North Dakota who had come to Duluth specifically to ride the color train. Even with the rain, they said they thoroughly enjoyed the ride and the scenery. 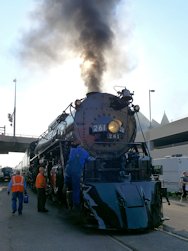