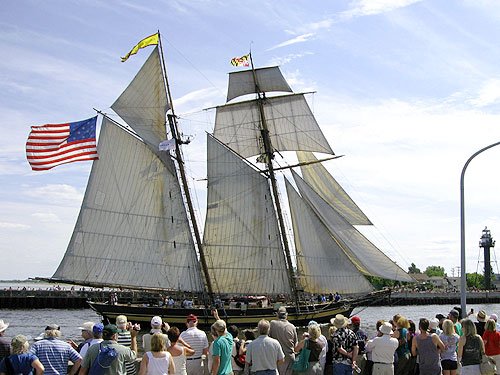 Several of the ships that visited in earlier years will be returning, but there also will be several new ships coming. At the same time there will be the Bayfront Park Art Fair - so Duluth will be one busy place during these four days.

Duluth, Minnesota Events Visitor Attractions (directory of our pages on things to see and do in Duluth)

2010 Tall Ships Festival. In the last week of July and the first week of August nine beautiful sailing ships arrived in Duluth as part of the Great Lakes United Tall Ships Challenge Race. Anticipating the arrival of these fantastic vessels Duluth decided the occasion was a good excuse for a party - so they hosted the Tall Ships Festival in Bayfront Park and the harbor in front of the Convention Center. Most of the ships were docked in the harbor for four days and hosted ship tours, allowing thousands of people to board the ships for narrated tours. In addition, two ships - the Roseway and the Denis Sullivan - offered two hour sailaway voyages out in the lake.

In addition to food and beverage tents the festival stage hosted numerous musical and entertainment acts each day of the festival. The highlight show was a nightly performance of the Pirates of Penzance comic opera performed by the University of Minnesota School of Fine Arts and the Duluth Playhouse. Mixing with the festival goers were re-enactors portraying members of the Royal Navy from the war of 1812.

We attended the first day of the festival to see the armada of ships parade in full sail from the lake through the canal and under the Aerial Lift Bridge to the inner harbor. To the delight of the crowd of over 75,000 onlookers some of the ships fired their cannons as they came through the canal.

See our photos and ship profiles below

< < < The HMS Bounty was the first ship in the Armada to enter the Duluth harbor through the ship canal. Modeled after the 1787 HMAV Bounty and constructed in 1960 for the movie Mutiny on the Bounty the ship is 120 feet long with a beam of 30 feet and capable of using 18 sails.

More recently the Bounty also appeared in the Pirates of the Carribean movie. The ship is used as a training vessel for sailors who want to learn the art of square rigged sailing. Passage can be booked on any of its several sailing tours per season as well as for special group experiences.

< < < The Roald Amundsen was originally part of the military fleet of East Germany built in 1952. She now offers tours spending most of her time in the North Sea, the Baltic Sea, and the Mediterrean. The Brig's seventeen crew members are drawn from volunteers affiliated with the Sail Training Assocation of Germany; her home port is Wolgast Germany.

< < < The Barque Europa passes under the Aerial Lift Bridge. She is a three masted Bark capable of flying 30 sails. Originallty built in 1911 as Lightship she was renovated and converted to a Bark in 1994.

Her home port is in the Netherlands but she sails worldwide, including expeditions to the Antartica. She carries a professional crew of 14 and can accomodate as many as 48 voyage crewmembers. Click here to read an interesting account of the race from Duluth to Sault Ste. Marie by crew member Matthew Maples.

< < < The U.S. Brig Niagara is two masted Brig with a total length of 198 feet and a beam of 32 feet. She is a reconstruction of Commodore Oliver Hazard Perry's victorious 1813 warship and flagship that participated in the Battle of Lake Erie and the War of 1812. After the War of 1812 the ship was scuttled but years later the wreck was salvaged and the keel used in the first reconstruction of the Niagara. The present ship is the second reconstruction and still uses some of the wood from Commodore Perry's original. The Niagara is thought by some to be the most authentic replica of an early 19th century naval vessel. Completing the historical accuracy, the modern day Niagra carries a set of 18 30 foot long oars making it perhaps the largest rowboat in North America. Her home port is the Erie Maritime Museum where on board tours are available as well as day sailing excursions and extended Tall Ships adventure programs.

< < < The Pride of Baltimore II fires a cannon shot to delight the crowd as she passes through the canal to the inner harbor. It is a reproduction of the Chasseur, a Baltimore Clipper topsail schooner that performed heroic service in the War of 1812. Her overall length is 157 feet and she has a beam of 26 feet.

In the late 18th century into the early 19th century, Baltimore, Maryland was the nations premier ship builder. "The design for Baltimore Clippers emerged from the shipyards of Fells Point in response to the need for fast ships that could elude the powerful but lumbering British naval vessels that preyed upon American shipping, even after our successful War of Independence."

The Pride of Baltimore II is possibly the fastest of the 9 Tall Ships in the Tall Ships Challenge race, but that doesn't mean she is a shoe-in to win because there is an elaborate handicap system employed to give all ships an equal opportunity to win..

< < < The Roseway is a Grand Banks fishing schooner built in 1925 by John James & Son of Essex, Massachusetts. Its overall length is 137 feet and carries a beam of 25 feet. The Roseway is one of three of the 4000 schooners built in Essex that are still sailing today.

It has been designated as a US Historical Landmark. It presently serves as a floating educational platform for the World Ocean School. In addition to on-board tours, the Roseway (and the Denis Sullivan) offered three hour sail away day cruises during the festival. Operating from its home port in St. Croix, Virgin Islands the Roseway offers charters, day cruises, and adult and youth educational programs. The Roseway also has an extensive cruise schedule offering opportunities for people to learn about and experience open sea sailing.

< < < The Zeeto is modeled after an 1850s fishing schooner. Originally built in 1954 and sailed the Carribean for many years, she recently has undergone extensive renovations under new owner Doug Hansen of Minneapolis and is available for charter on cruises on Lake Superior.

< < < The Coaster II is a 58 foot 1930s era schooner operating out of Marquette, Michigan. Built in 1933 at the Goudy & Stevens shipyard in Bothbay, Maine, her sailing history spans ". . . more than 75 years on the Atlantic and Pacific oceans, and both sides of the equator." In 2007 she was purchased by Niko Economides and extensively renovated and brought to her new home in Marquette, Michigan. Now operating on Lake Superior and the Great Lakes, she is available for two to eight hour day cruises as well as overnight excursions.

< < < Missing from the Armada's Grand Parade was the S/V Denis Sullivan. She was delayed because of storms in Lake Superior near the Upper Peninsula. Modeled after a 19th Century 3 masted Great Lakes Cargo Schooner, the Denis Sullivan's home port is Discovery World in Milwaukee, Wisconsin. "Annually the S/V Denis Sullivan travels over 18,000 nautical miles a year from her summer home at Discovery World at Pier Wisconsin, along the east coast to her winter home in Southern Florida. The journey is an unparalleled exploration of the five Great Lakes, East Coast and Caribbean, and the hydrological cycle in its entirety. . . The vessel can carry up to 21 participants overnight and 50 passengers on day sails. She is complemented by a professional crew of ten."

See More Tall Ship Pictures and Profiles from the 2013 event