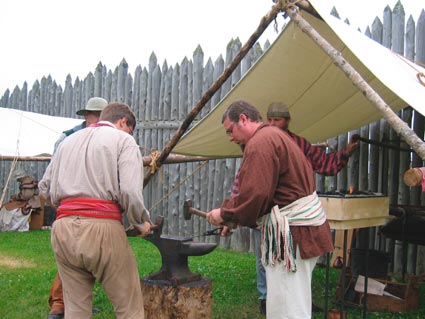 The second weekend in August, the National Park Service staff and over 300 volunteers and re-enactors gather to re-create the height of the Voyageur & Fur Trade Era and the activities at the former North West Company Trade Depot at Grand Portage, Minnesota. Jo and I have been to and enjoyed the Rendezvous at Prairie Du Chien so we were looking forward to the Grand Portage event. We thoroughly enjoyed the experience - a living history lesson.

While a visit to the Grand Portage National Park any time during their season offers interesting insight into the 18th century era of the exploration and trade during the Voyageur Era, this presentation is dramatically expanded during the Rendezvous Days with a large re-enactor encampment, workshops, contests, and presentations. The National Park Service and its volunteers make a concerted effort to show you what it was like to be at the North West Company post during their annual rendezvous in August 1797 as ". . . the native Ojibwe (aka Ojibwa), voyageurs, agents, and company partners gather to transfer the company's goods, to conduct business, and to celebrate their good fortune."

Coinciding with the Rendezvous Days, the Grand Portage Band of the Lake Superior Chippewa Nation hosts a traditional Pow-Wow where tribes from across the upper midwest are invited to participate in a three day celebration of Ojibwa and upper midwest Indian cultural heritage. While the event is a re-creation of native heritage, people from all backgrounds are invited to participate and enjoy the activities . . . and when they say "all can participate" they are serious as we saw several dancers in full Indian regalia who looked like their heritage was primarily European.

A group of children of rendezvous partners and Grand Portage villagers assembles on the porch and front lawn of the "Great Hall" to hear some stories.

Meanwhile inside the Great Hall, the table is being set for the meal and business meeting of the North West Company partners, agents, and Indian trading allies.

In the kitchen the staff is preparing stew, baking bread, cookies (and samples are available for tasting!), etc. for the guests.

During the Rendezvous Days the re-enactors in the Warehouse demonstrate traditional woodworking and happily entertain questions from visitors about their craft and their era.

Hanging from the ceiling in the Warehouse are several examples of Voyageur canoes, including the huge freighter canoe that traveled on Lake Superior.

A few of the hundred plus tents set up in the historic encampment.

Here's one of the "clerks" of the North West Company and his "pork eater" (aka go-fer) assistant. The clerk told us about the goods he was recording for eventual bartering with his Indian trading partners.

Every person in the encampment assumes a historically accurate role from the Voyageur Era. They not only dress appropriately, they study the history of their character, learn about the tools and goods used in their trade or role, plus concoct a "story" of what they are doing during this time. But they also readily step out of their roles to answer questions or converse in present time.

Being a visitor at the encampment is like being a time traveler who has stepped into the time machine and traveled back 200 years . . . finding yourself in a community that has been expecting your arrival. Touring the camp was fun and educational. We fond by being able to see and touch artifacts from the era, plus interview and converse with a wide range of characters from that time period, a particularly effective means of learning the history of the fur trading and voyageur period.

These two duck hunters are making decoys out of reeds. They told me that in preparation for the Rendezvous, they go on primitive camping and hunting trips using these decoys and black powder rifles so they can directly experience many of the small details of actually living their characters.

Throughout the camp you can see traditional crafts like woodworking and cooking being practiced.

We watched a demonstration of loading, handling and
firing a black powder musket. > > >

There are so many crafts and characters it is impossible to see and experience all that the rendezvous offers in one visit. This is an event you can experience several times and still learn something new.