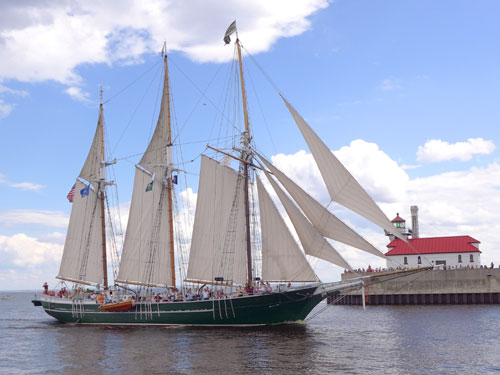 Duluth Events, things to do & see(directory of our pages on interesting things to see and do in Duluth)

In Late July, 2013 the Tall Ships came again to Duluth. The last time the Tall Ships Visited Duluth was in August of 2010 where nine beautiful sailing ships arrived in Duluth as part of the Great Lakes United Tall Ships Challenge Race.

In 2013 the ships were again participating in the Tall Ships Challenge Race; the ones appearing in Duluth were part of the race from Sault Ste. Marie Ontario to Duluth Minnesota.

Returning from the 2010 Tall Ships Festival were:

Plus 5 new Tall Ships (see below)

You can see photos and information/history on the above ships at our 2010 Tall Ships Duluth page. 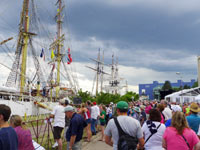 The SS Sørlandet was the most popular Tall Ship for dockside tours (here being admired by festival attendees). Thursday afternoon was a beautiful day for the Parade of Sails but rainy weather was coming as you can see by the gray clouds in the background.

New for the 2013 Tall Ships Festival (see pictures and descriptions further down the page) were: 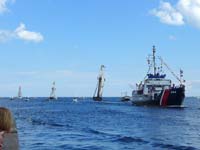 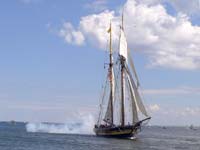 The festival officially began at noon on Thursday, July 25th with an expected arrival of ships about 2 pm for the Grand Parade of Sails. Some of the ships arrived the night before and hosted day tours out in the Duluth bay. Around 2 pm the ships congregated in the outer harbor to begin the parade, passing the lighthouses as they pass through the ship canal in Canal ParK and underneath the aerial lift bridge to the inner harbor. On Friday and Saturday several of the ships were available for dockside tours and some continued to run short day sail excursion trips out into the bay and back. Jo, Donna, and I were able to tour the US Brig Niagara and the Peacemaker. There was food and entertainment on both days. On Sunday tours and day sails continued and on Monday the ships departed for the next leg of the Tall Ships Challenge Race. 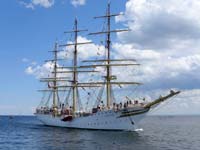 The Norwegian SS Sorlandet was built in 1927 as a sailing training vessel and continues its educational and training mission today. It was the largest sailing ship participating in the Tall Ships festival measuring a sparred length of 210 feet with a mast height of 112 feet and carrying 27 sails. 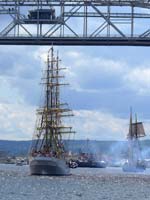 To our dismay for some reason the Sørlandet did not raise any sails during the Grand Parade of Sails. We were looking forward to seeing her actually under sail. Perhaps it was because she seemed to just barely clear underneath the raised Aerial Lift Bridge (see photo to the right as she fires her cannon)?

Learn more about the SS Sørlandet on its website. 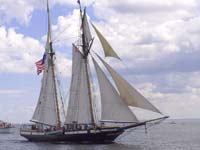 The Lynx was built in 2001 and modeled after a Baltimore Clipper of the same name that took part in the War of 1812. These privately owned ships were authorized by the government to attack the British shipping and merchant vessels. Since the US Navy fleet was quite small, Privateers were a valuable additon to the naval effort. Owned by a educational foundation the Lynx participates in programs to teach the history of the War of 1812 as well as serving as a sail training vessel.

The Lynx has a sparred length of 122 feet with a Mast height of 94 feet and carrys 8 sails.

Learn more about the Privateer Lynx on its website. 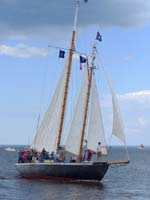 Originally built as a pleasure yacht in 1925 and went through a succession of owners. During World War II she was outfitted with a machine gun on her foredeck and commissioned by the Navy to patrol the coast looking for German U-Boats. Falling into disrepair by the year 2000 she was rescued from demolation and fully rebuilt in 2006. She currently hosts day sails and tours and is available for chartered cruises.

The Hindu has a sparred length of 79 feet and a mast height of 64 feet. She carries 4 sails.

Learn more about the Schooner Hindu on its website. 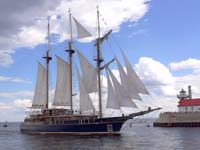 The Peacemaker was the most unusual ship participating in the Tall Ships Festival and it also has the most unusual ownership. Originally built in Brazil for a Brazilian industrialist as a pleasure motor yacht. The ship was launched in 1989 and later brought to Palmer-Johnson Boatyard with the intention to convert it into a sailing ship. But repairs were never commenced and it lanquished there at the boatyard for twenty years until it was purchased by the Twelve Tribes, a Christian-based artisan organization with local communities in the United States and eight other countries. Members of the community refurbished the vessel and completed the conversion to a Barguentine Sailing Vessel. 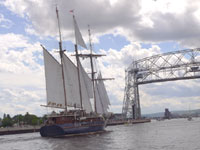 The ship provides practical education for the community's youth in numerous skills associated with operating and maintaining the vessel as well as laboratory for teamwork and cross-cultural awareness obtained in its travels from port to port.

The sparred length of the Peacemaker is 150 feet and its mast height is 123 feet. She carrys 14 sails. 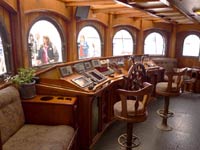 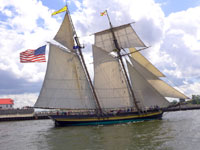 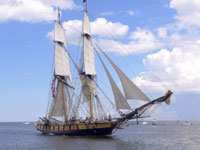 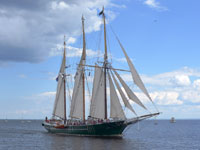 You can see more pictures and information and history on these ships and the Zeeto and Coaster on our 2010 Duluth Tall Ships page.

Dockside Tours of Tall Ships - US Brig Niagara & The Peacemaker

See pictures and our post on our dockside tours of two Tall Ships.