The 7 mile long sand beach of the Minnesota Point sand bar that juts out from Duluth's Canal Park into Lake Superior is Duluth's summer playground and swimming beach. Approximately mid-way along the beach is the Park Point Beach House and recreation field, constructed in the 1930s as WPA project. Park Point is the neighborhood that occupies Minnesota Point.

Links to Park Point Events
(at bottom of page)

Since Minnesota Point is essentially a narrow 7 mile long sand bar, the Park Point neighborhood is spread out along one street, Minnesota Avenue, that runs about 4 miles from Aerial Lift Bridge to the Park Point Beach House & Park. Properties on the east side of the street overlook or have access to the extensive public sand beach fronting Lake Superior. Properities on the west side face Superior Bay and many of these properites have boat docks and water access. Each year the Park Point community hosts an annual Rummage Sale the middle weekend in June and on the last weekend in July hosts the Park Point Art Fair. In addition to swimming and sunbathing on the beach and attending these two major events other fun things to do include hiking the four mile nature trail loop at the southern end of the point, biking around the neighborhood, and enjoying various water sports as private boats and watercraft can be launched at the public boat landings at the Beach House Park. The protected area called Superior Bay that lies between Minnesota Point and the mainland is favorited for sailing, water skiing, and fishing. 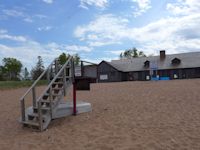 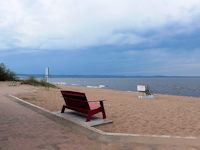 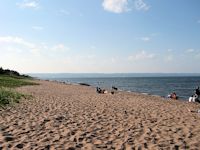 By July the beach scene at the top of this page looks somewhat different. City workers have cleaned up the driftwood and the sand is full of footprints from swimmers, boaters, sunbathers, and beach hikers. 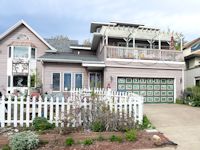 The Park Point Neighborhood is a mix of quaint cottages and more opulent homes. But the lot size and zoning has prevented the development of sprawling estates keeping an eclectic character to the neighborhood. 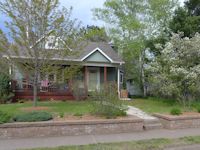 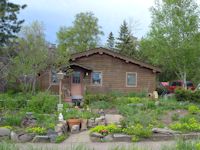 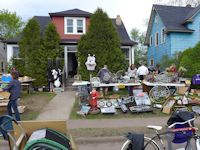 The Park Point Rummage Sale is a hybrid of yard and garage sales held in other neighborhoods. It has been running for 28 years and gets more popular each year as out-of-town folks come to shop for good deals and unique items. Food vendors and porta-potties are set up along the route (Minnesota Avenue). 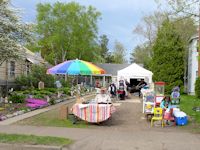 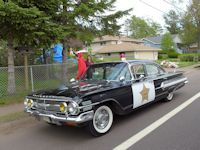