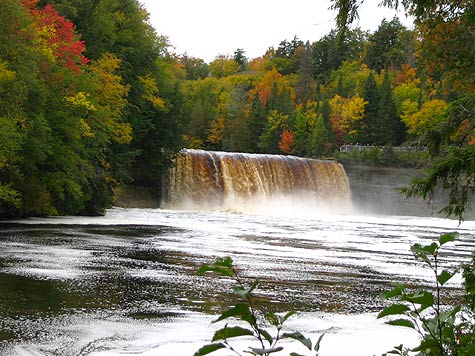 A few miles west of Paradise, Michigan Tahquamenon Falls State Park is a popular park most noted for its impressive waterfalls, but also popular for boating, canoeing, fishing, hiking and camping. It has one other notable feature, a brew pub, apparently located within the park. I say "apparently" because the Tahquamenon Falls Brew Pub & Restaurant is actually an island of private property within the park that came about years ago when the state acquired ownership adn access to the upper falls from private ownership who had a camp on the present site of the brewery and restaurant. It turns out to be a win-win for both the family who sold the access and the State of Michigan because any patron of the brewpub or restaurant must purchase a daily park sticker to get to the facilities.

Some of the pictures below were from a Fall Color Tour of the central and eastern UP hoping to catch some great fall foliage. In some areas of the UP we were too early for good color, but the woods around Tahquamenon Falls showed better color than most in the area and we got some nice fall color pictures.

The quarter-mile trail to the Upper Falls from the parking lot and the Brew Pub is handicap accessible and partially paved. There's also a slightly longer nature trail leading to the falls overlook.

< < < View from one of the waterfall overlooks on the handicapped accessible trail.

This leg of the trail leads downstream of the Upper Falls to the gorge where a set of 112 stairs will take you to the river's edge.

A view of the falls on the way to the gorge.

This viewing platform at the edge of the Upper Tahquamenon Water Falls can be reached by ascending 92 stairs from the paved overlook trail.

Where you can get an up close view of the falls. The vertical drop of the falls is almost 50 feet and it is more than 200 feet wide, making it one of the largest waterfalls east of the Mississippi. 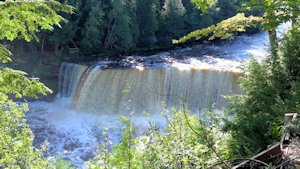 Hiking Trail to the Lower Falls

The trailhead for the four mile long River Trail begins where the paved walkway to the top of the stairs that lead down to the Upper Falls gorge ends. It is one of the more popular hiking trails as it runs along the Tahquamenon River and connects the Upper and Lower Falls. Due to exposed roots and hilly terrain it is rated as a medium difficulty hiking trail, but also the most scenic in the park. Between Memorial Day and Labor Day the park offers a shuttle service between the falls for those not willing to negotiate the hiking trail.

The lower Tahquamenon Falls are actually a cascade of several smaller waterfalls on either side of the large island in the middle of the river. The North branch falls can be reached by a boardwalk trail. The South branch and falls can be seen from the island which is accessible only by boat.

This viewing platform is at the edge of the cascades of the Lower Tahquamenon Water Falls - North Branch.

Cascades above the last drop of the Lower Tahqumaneon Falls. 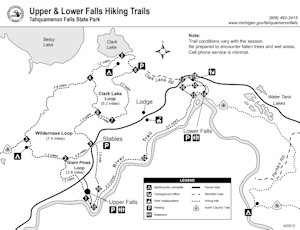 Overall, Tahquamenon Falls Park offers approximately 40 miles of hiking trails. Other popular hikes are the Clark Lake Trail and the Tahqua Trail that leads to the Rivermouth. The North Country Hiking Trail also goes through the park and past the park campgrounds.

Tahquamenon Falls State Park has two primary campground areas. The largest is adjacent to the Lower Falls. It offers 188 sites with electrical service and modern washrooms. The second major area is the Rivermouth campground, which as the name suggests is near the mouth of the Tahquamenon River as it empties into Lake Superior. It has 72 sites with electricity and modern washrooms. It also has a 36 unit rustic tent camping area with vault toilets. There's also a 50 unit group camping site and a large lodge and a camper cabin available.

PDF map of the park and camping areas

Paradise, Michigan is the closest community to Tahquamenon Falls. It stretches along the west shore of Whitefish Bay and offers gift shops, restaurants, outfitting, and lodging services.

Had a great fish fry at the Little Falls Inn near the Best Western Motel.

If you have time, take the trip north of Paradise to Whitefish Point to see the lighthouse, beach, shipwreck museum & gift shop, and the Whitefish Point Birding Observatory.

Get an Adobe PDF file from the National Park Service showing hiking trails and campgrounds.

Other Resources to Plan Your Visit to Pictured Rocks National Park.

Lake of the Clouds Scenic Overlook is one of the top scenic attractions in the Upper Peninsula.