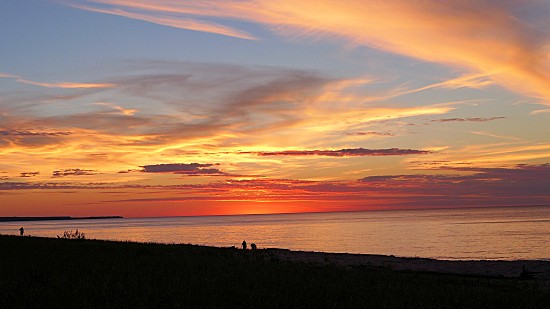 Sunset over the beach at Grand Marais, Michigan - Upper Peninsula

We first stayed in our RV at Grand Marais's Woodland Park campground in 2006 and enjoyed rock picking on their Agate Beach. Previously we had visited Grand Marais when we were still tent camping and first exploring Pictured Rocks National Park. Grand Marais anchors the eastern end of the park easily accessible to Sable Falls, the Grand Sable Dunes, Au Sable Lighthouse, and the Log Slide Overlook.

Woodland Park Campgroiund is operated by the city of Grand Marais. Rates are reasonable, its location very good (adjacent to Pictured Rocks and within walking distance of downtown Grand Marais), and the campground has a very scenic and expansive sandy beach which also offers some pretty good rock picking, including an opportunity to find the treasured Lake Superior Agate. The sites themselves aren't spacious but are level and adequate. They offer electric, water, and a dump station.

The town itself has a well protected harbor that offers sailing and boating opportunities essentially equal to an inland lake. It also has an expansive, sandy swimming beach. Even if it were not the eastern gateway to Pictured Rocks, I could see Grand Marais being a popular destination vacation area.

< < < A "Laker" freighter heads west near Grand Marais as the sun sets. (This is the same scene also in our masthead)

This historic First Lutheran church across from the Woodland Park campground played its chimes every hour. 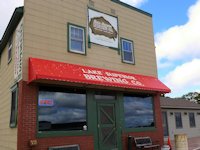 Lake Superior Brewing Company - Dunes Saloon is one of the earliest small craft brewing establishments around Lake Superior. Nothing fancy, yet you get friendly Yooper hospitality, good sandwiches and fixings and great home brewed beer. As the owners say on their website page " If you can't have a good time here, you don't know how to have fun."

In 2014 we sampled their Whitefish Basket since that is the signature Lake Superior delicacy on our tours around the Big Lake. The Dunes Saloon's Whitefish fish basket came with a modest serving of cole slaw and a large quantity of their homemade chips. The fish was good, not overly breaded. Id put it just a wee bit behind what Id consider the gold standard whitefish dinner at the Angry Trout Café in Grand Marais, Minnesota. The price was $13, a bit more than I expected for a bar, but the quality of the food was good and there was top-notch service. 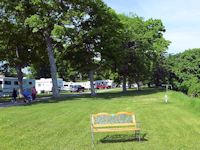 < < < The Woodland Park Campground _See our Review & Pictures offers 132 campsites with the majority offering both electric and water hookups. The serviced sites also include cable TV and wireless Internet. The baths have showers and a laundry area. sites offer some shade but are spaced more for RV's than tents. 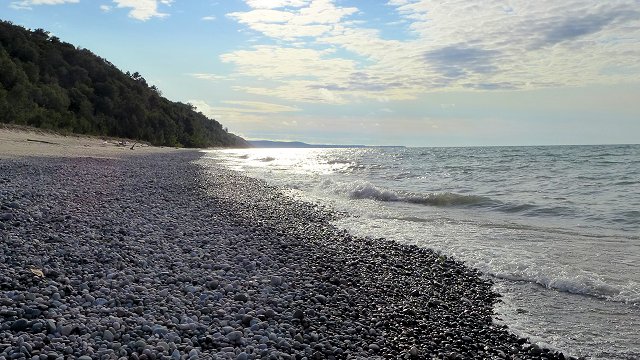 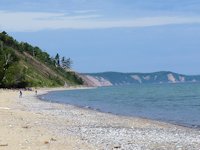 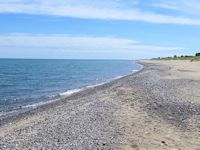 The outer beach at Grand Marais, MI is attractive and an excellent Lake Superior Rock Picking site. Some of the premier Lake Superior Agate finds have been in this vicinity. To the east you can hike to the lighthouse and breakwater and to the west can hike to Sable Falls in Pictured Rocks National Park.

If I had continued to dig down through this submerged pile of pretty beach stones maybe I would have found one!

Rock Pickers and Agate Hunters should make sure to stop in the Gitche Gumee Agate and History Museum for its display of agates, gemstones, and minerals as well as history and information on the geology around Lake Superior. 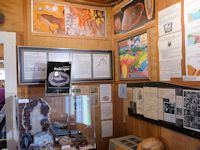 The museum celebrated its 20th year in 2019 and in addition to the museum also offers some interesting jewelry and decorative artifacts for sale.

Museum Curator Karen Brzys is a leading authority on Lake Superior Agates. Her website offers unique and informative information on agate hunting and the geology and history of agate formation as well as a professionally mastered DVD on the art and science of Agate Collecting.

Karen will be giving an "agate talk" presentation at the 12th annual "Lake Superior Agate & Rock Festival" to be held at the Grand Marais Community Center. 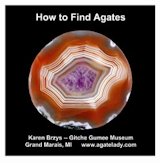 DVD: How to Find Agates

See our profiles of the best Agate and Rock Picking Beaches in the Upper Peninsula.

In September is the Annual Lake Superior Agate and Rock Festival, always a fun time as well as educational.

More interesting things to see and do