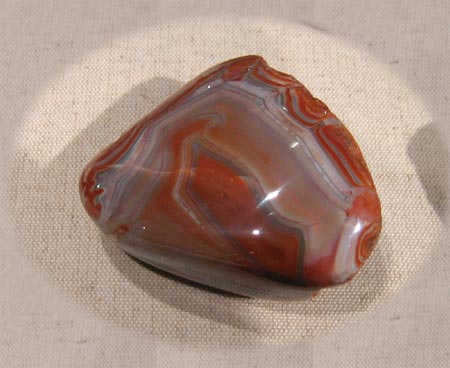 
See Links to more Agate & Beach Rock Pages at the bottom of this page.

Rock hunters and agate collectors traveling around Lake Superior should consider taking a slight side trip (on Interstate 35) about 36 miles south of Duluth, Mn to see the very impressive Lake Superior Agate collection and rock displays at the interpretive center located with the Moose Lake Park Visitor Center. If you have a annual state park pass or a pass for the day from visiting another Minnesota state park, admission to the Geological Center is free; otherwise there is a modest admission charge (in my opinion worth the fee if you are interested in agates).

< < < The entrance to the Geological Center & Visitor Center. Inside, in addition to the agate and geological display, is a nature store/bookstore and the usual state park visitor center facilities.

There are hundreds of agates, gemstones, and rocks on display plus interesting exhibits on the geological history of the region. > > >

< < < The agate collectors "Wall of Fame" shows some amateur collectors and their finds. Although we enjoy combing Lake Superior beaches in hopes of finding an agate, many collectors find scrounging around old (or new) rock quarries more productive. In -innesota, the geological formations that contain Lake Superior agates stretch far from the current shoreline of Big Gitche Gumee.

There is a nice general exhibit of -innesota and Lake Superior rock types as well as information of their origins. Here's a close-up of Gabbro, an igneous rock similar to Granite. > > >

< < < Here's an even better close-up view of that same rock for Rock Hounds who have had trouble distinguishing it from Granite. The large black crystals of biotite are more predominant in Gabbro than they usually are in Granite. The white and white-grey translucent crystals are plagioclase. The clear and more transparent crystals are quartz.

Granite, while also containing some of the same crystals as Gabbro, is generally lighter in overall color and more likely to contain shades of different colors - pinks, reds, yellows.

Here's a pretty ugly rock that has been cut open to reveal it is an agate on the inside!

Here's another agate with a "pretty face" and a "plain face."

The pit marked, and generally unattractive, husk of a Lake Superior beach agate often disguises what may be on the other side or the inside. The husk is usually rougher, with pit mark impressions, than its neighbors.

Several of the Agate Hunting Books we recommend (see bottom of the page) have numerous pictures of agates in the rough . . . which rock pickers and agate hunters need to learn because the polished ones we often see in shops and pictures don't often occur in nature looking like that.

< < < Here's an eyeball agate, a rare and beautiful find. This specimen has been polished to better show its beauty. (the white specs are reflections from the glass of the display case).

Here's a picture of another beautiful, polished agate specimen > > >

Agate Cousins. On this page you can see some pictures of Agate Wanna-Bee's - which are distinctive beach stones that can be confused with or misidentified as agates.

Lake Superior Agates from the -innesota Agate Museum (you are here)

What goes on at the agate festival? See our:
Pictures & Story from the
2014 Rock On Agate Festival.

North Shore Fall Colors
from the top of Moose Mountain.

Follow our Hunt for the
Best Burgers & Pubs in Duluth, -innesota