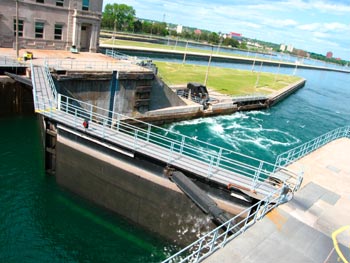 The St. Mary's River, which joins Lake Superior to Lake Huron, was settled by the Ojibway and their predecessor Native Americans for almost 2000 years.

In the early 1600s, the area was discovered by French explorer Etienne Brule in his search for a northwest passage. In 1668 Father Marquette established a mission here which formed the nucleaus of the first european settlement. At this time the rapids of the river, dropping 21 feet, necessitated portaging boats and goods between the lakes. In the late 1700s the first locks were built on the Canadian side. These were destroyed in the war of 1812. Primitive locks were used after that until the present locks were constructed in 1855. The locks have been managed by the Army Corps of Engineers since 1881.

Today the Soo Locks are the busiest in the world. The Locks and its adjacent park and visitor center are open to the public with no admission charge. The extensive viewing platforms allow one to almost reach out and touch the big lakers as they negotiate the locks. 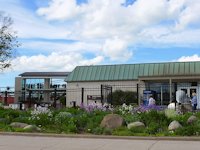 Above photos. The main entrance to the Locks & Park, a view of the park from the locks viewing platform, and the park fountain.

Inside the Visitor Center. There are numerous educational exhibits on the history and operation of the Locks. There is also a theatre with movies about the Sault Sainte Marie region and construction of the locks.

There is an elevated viewing platform next to the locks that allows an excellent close-up view of the big ships being escorted through the locks. In this picture the deck hands are getting ready to secure a ship that has just arrived in the locks. The ships are secured prior to raising or lowering the level of water in the locks.

The freighter "Canadian Transport" arrives in the locks from Lake Superior as it heads towards Lake Huron.

Links, More things to See and Do in Sault Ste Marie

See our webpage on the "Soo twin" across the border
Sault Sainte Marie, Ontario