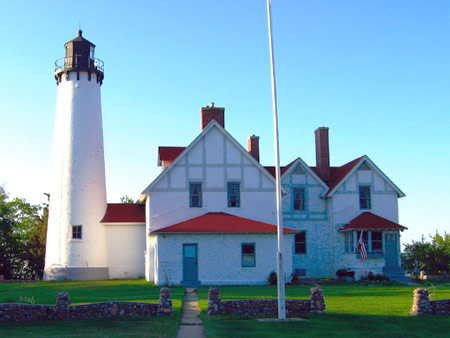 The Hiawatha National Forest maintains Point Iroquois Lighthouse as a historic structure. It is located a few miles north of Bay Mills on the lakeshore drive. The point is the site of a historic battle between the Iroquois and Chippewa Indians. As a strategic gateway to the St. Mary's River channel, the point served as a navigational aid to early voyageur-traders and later the commercial shipping industry. The lighthouse was constructed in 1870 and operated until 1963 when it was de-activated and replaced by an automatic light in the middle of the channel.

Visitors can climb the stairs to the top of the lighthouse tower and view the lake and channel through a telescope. There is also a small museum exhibit and a rendition of the captains quarters and a boardwalk nature trail around the point.

< < < The spiral staircase leading to the top of the lighthouse tower.

The light tower now contains a telescope and a great panoramic view. The reflection in the window is Jo using the telescope to look out over the bay. > > >

The tiny blip out on the lake is the automatic light that replaced the one in the light tower. A portion of the lakeside nature trail is also seen.

The boardwalk nature trail is a nice opportunity to stretch the legs and grab a sea breeze off the lake. It ends by the restrooms - good timing! > > >

A few rooms are set up as museum exhibits furnished as they were when the light keeper and his family lived there.

There are also two rooms of educational exhibits with artifacts, pictures, and narrations on the history of the Point Iroquois Light

Going east through Baraga towards Marquette