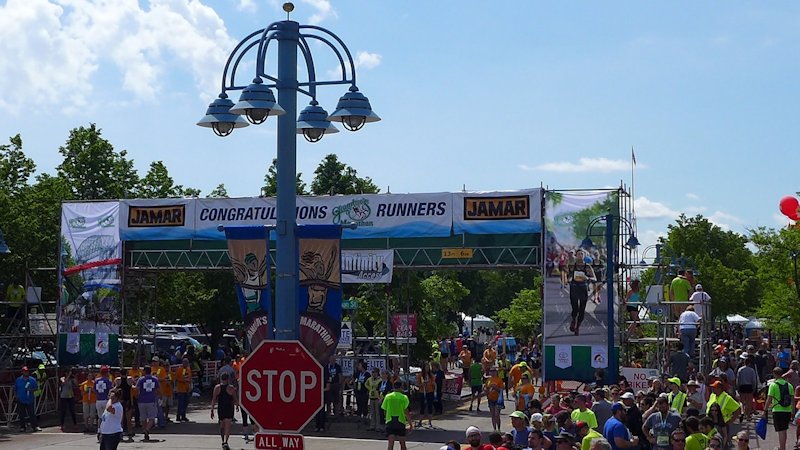 Saturday, June 17, 2017
It was a beautiful day for the 41st running of Grandma’s Marathon. 6444 racers competed in the full marathon (26.2 miles) and 7337 ran in the Gary Bjorklund Half Marathon (13.1 miles). The last time we attended a Grandma’s Race Festival (see photos and article) was in 2008 where we watched part of the race part way between Two Harbors and Duluth along Scenic Highway 61 at the Stoney Point Race Checkpoint. After watching the race along the road for a while, we then headed to Duluth to catch some of the finishers. Traffic and having to park about a mile away from the finish line meant we got there too late to see the overall winners in the regular race and the wheelchair division. So in 2017 we arrived earlier in Duluth to position ourselves to catch the overall winners down the home stretch.

The Half Marathon Race starts about an hour and half (6:15 am) before the Full Marathon so that many of the racers are across the finish line before the regular racers arrive. But with 7337 competitors many half-marathoners were heading down the home stretch at the same time of the leading wheelchair racers and top marathon runners.

One thing I marveled at was the relatively large number of “plus-size” men and women competing in and FINISHING the 13.1 mile half-marathon. You go people, Kudos!

Winners. Runners from Kenya dominated the top finishers in the full marathon, taking the first 8 places. Elisha Barno (2:12:06) finished a minute and half ahead of fellow Kenyan Geoffrey Bundi. The top American finisher was Sergio Reyes who finished in 10th place. In the Wheelchair division Aaron Pike nosed out Joshua George in a photo finish both finishing in a time of 1:29:02. In the women’s wheelchair race division there was also a photo finish with Amanda McGrory overtaking Susannah Scaroni both with finishing times of 1:40:02.

We saw two racers whom we watched in 2008. 40-year-old Mary Akor who was the women’s champion in 2008 was the top finisher in the 40 year and older women’s division. And wheelchair winner Amanda McGrory was also the winner in 2008.