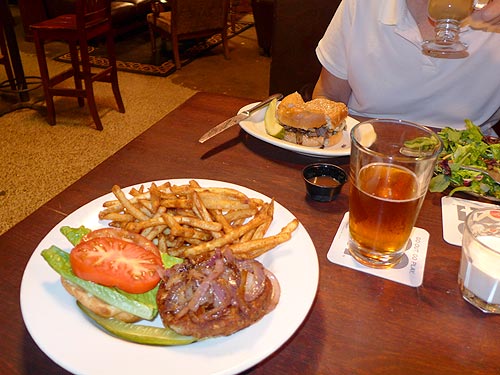 My Dubh-Linn Veggie Burger with fries and tap of Maple Ale (foreground)
and in the background Jo's Mushroom & Swiss Burger with side salad.

Earlier in June, we began our hunt for the best hamburgers In Duluth, Minnesota. Previously we had searched for and reviewed the best burgers in Superior, Wisconsin and in June we sampled two excellent Duluth burger establishments - reviewing Zeightgeist Arts Cafe and Clyde Iron Works. In July we attended the annual Duluth Sidewalk Sale and had an opportunity to catch lunch at the Dubh-Linn Irish Pub on West Superior Street in downtown Duluth. We had heard they had a decent burger so it was on our short list of Duluth-Superior Twin Ports Best Burger Hunt. While they had outside dining for the Sidewalk Sale, we elected inside dining.

The Dubh-Linn Pub has eleven styles of burgers with a variety of toppings plus a veggie burger that you choose what toppings you want on it. Jo chose the Mushroom and Swiss burger with a side salad of leafy greens. Their standard burger size is 6 ounces and is served on a sesame seed bun. Jo found this size burger much easier to eat than the 8 ounce versions she had at Zeitgeist and Clyde Iron Works. As far as taste, the word was "scrumptious" - a five star rating. The side salad got good reviews too - nice and crisp leaf lettuce.

My veggie burger was one of the best I've had. It was meaty, juicy, and if I were blindfolded I'd probably not guess I wasn't having a conventional burger. I liked the idea you could choose from a variety of toppings. I had mine with lettuce, tomato, and fried onions.

The Dubh-Linn atmosphere exudes warm comfort with dark oak furnishings and subdued lighting. The back bar is stocked with an amazing array of libations. They advertise they have the largest selection of Irish Whiskey and Single-Malt Scotch in Minnesota. For beer lovers, they offer 27 beers on tap, including a few of their own small batch craft beers. Adjacent to the main pub is a game room and their comedy club. The service is friendly and efficient and garbed in Irish kilts (women) and braces (men). 5 stars for burger, service, and comfortable atmosphere. 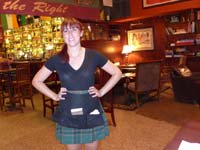 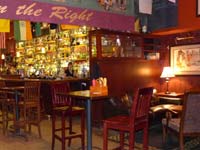 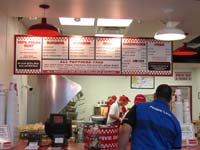 In our search for burger places in Duluth-Superior, Five Guys Burgers got some good reviews. They claim theirs is the "Best $5 Burger a Man could Eat." They might win that contest against McDonalds but not against Anchor Bar's Burger across the bridge in Superior. And the atmosphere is spartan, fast-food, not a pub or restaurant. But you do get quite a bit for under five bucks, serving quality meat and their menu option of being able to add up to a dozen toppings at no extra charge. The only cheese option, however, is American Cheese (i.e. processed cheese, yuk!). Unfortunately Jo and I elected that option since we've had cheese on our other burgers and felt we ought to keep the playing field level. Bad move. The taste of that gooey gunk dominated the burger and whatever toppings were included. Picking out a few pieces that weren't "contaminated" Jo found the burger meat satisfactory. The fries were fat and very potato chewy, actually quite good tasting . . . if you like your fries on the greasy side.

Service was friendly and efficient. Our burgers and fries were served hot and juicy - just like they advertise. The place was kept clean and a bonus is free peanuts-in-the-shell while you wait for your order. Five Guys puts out a decent burger (for the price) and the crew in Duluth is on-the-ball, running the place like a well-oiled machine. 3 stars. Not close, but not bad either. 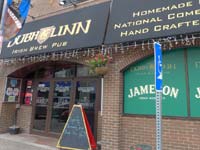 The Hunt for the Best Burger Continues

So far Dubh-Linn seems to be in the lead for Duluth's Best Burger. We'll be continuing our hunt for best burgers in Duluth Minnesota Twin Ports community as we get an opportunity to sample other Duluth and Superior establishments putting out a good burger.

On our initial Duluth short list for continuing our quest for Duluth's best burger is the Duluth Grill, Sara's Table, and Big Daddys. We took Sara's Table off the list because we discovered their deluxe burger is only offered certain times and days. Later in the month, we were able to catch some good burgers at Duluth Grill and the Canal Park Brewery. Hope to sample Big Daddy's burger in 2014