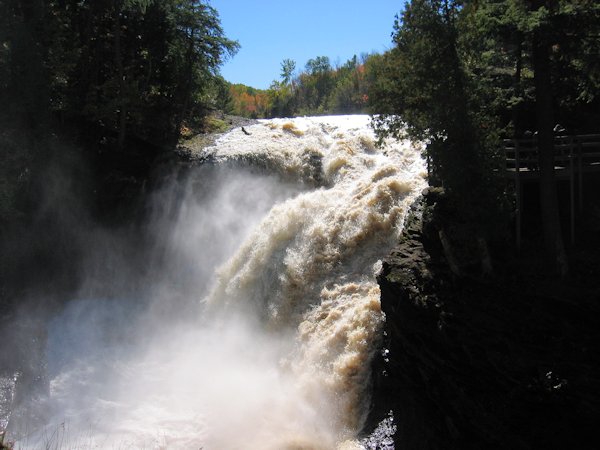 Rainbow Falls on the Black River

The Black River begins in Wisconsin and heads north into the Michigan Upper Peninsula and finally empties into Lake Superior. While only 30 miles long, the river drops over a 1000 feet on its way to Lake Superior. The last few hundred feet of this drop are part of the Black River Scenic Parkway that includes hiking trails to five waterfalls, an attractive picnic area, a 40 unit campground, and a boat launch and harbor docking area.

The park also has an extensive sand beach on Lake Superior that also happens to be a premier Agate Hunting Beach.

Rainbow Falls (pictured above) is the highest of the five waterfalls in the park. 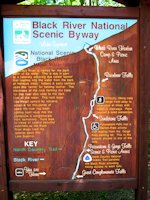 In addition to some of the prettiest waterfalls in the Upper Peninsula, the Black River National Parkway offers some fine hiking trails. The North Country Trail that runs from the Porcupine Mountains enters the Park east of Rainbow Falls, crosses the suspension bridge over the river and then runs along the ridge above the four other waterfalls before continuing West towards Wisconsin. Shorter trails run from parking areas along the Parkway to each of the waterfalls.

Two shots of Rainbow Falls late May . . . and early October (on right). 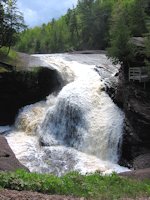 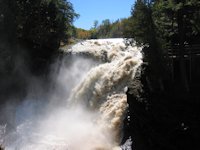 Stairways lead down to viewing platforms by each waterfall.

Here's a video we took of the falls 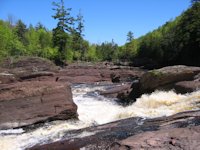 The next falls upstream from Rainbow Falls is Sandstone Falls. Click on the image for a larger view. 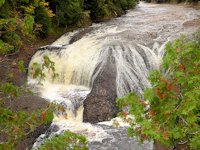 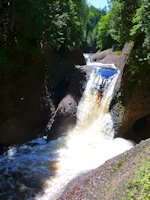 The trail to Potawatomi Falls is barrier free, providing an opportunity for people with disabilities to see the falls. Large, old growth hemlock, white pine, and climax forest hardwoods add to the area's beauty. (When these pictures were taken, the trail to Gorge Falls was closed for repair. Since has been re-opened)

Conglomerate Falls splits into two cascades. In the photo on the right you can clearly see the conglomerate rock that gives the falls its name. 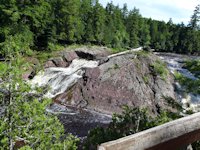 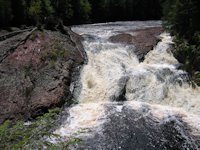 Take the Parkway back to Bessemer and proceed east on US 2 to Wakefield Michigan where you take Michigan 519 to Presque Isle Park Unit of the Porkies and see the waterfalls along the Presque Isle River.

From there you can take the South Boundary Road to visit several scenic overlooks in Porcupine Mountains State Park.