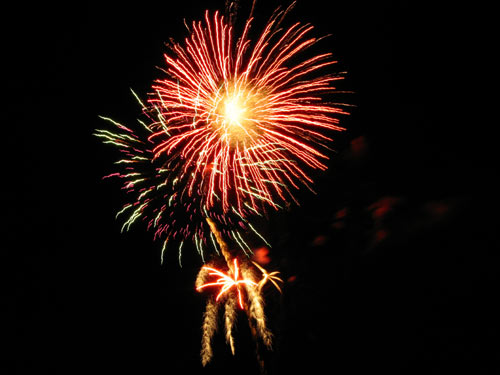 Every year on the 4th of July, Ashland hosts a parade, a concert at the bandshell, and fireworks over the lake. Our favorite spot to view the fireworks is from the deck of the Hotel Chequamegon. We've also set up lawn chairs in the Marina Park which also offers a good view of the display. We've never managed to get to the Kreher RV Park early enough to get a campsite there as that would also offer a terrific view of the fireworks plus you'd have all the comforts of your RV as you watch them.

The 2018 Independence Day Celebration will be held on July 4th. The Independence Day parade starts at 11 am; Brats and Hot Dogs will be served on the Courthouse lawn; the Chequamegon Bay Concert Band performance in the Band Shell is scheduled for 8 pm; the Oredock 4th of July Party is from 4 - 10pm, the Fire Engine Run will take place at 9:30 pm; and followed by fireworks around 10 pm over Chequamegon Bay.


Events & Other Things to See and Do in Ashland Wi

Below are some pictures from spending the fourth of July in Ashland. We just happened to conclude a Circle Tour around Lake Superior in Ashland WI on the afternoon of the 4th. We've long wanted to dine at Hotel Chequamegon so we decided to make their parking lot our base of operations while we dined at the hotel and later watched the annual Fireworks.

Before dinner, we took a stroll along the breakwater of the Harbor.

This seagull wasn't bothered by the threatening sky. > > >

We had hoped to dine on the hotel deck overlooking the lake, but shortly after we sat down, the rain drops began . . . and soon chased us inside.

But the rain didn't affect the ambience of the Molly Cooper Lounge and we still had a great lake view. Nor did the rain dampen the taste of the planked Wallaye dinner and the 'Marys' and snits that accompanied our meal!

After dinner we enjoyed a 4th of July Memorial concert by the Ashland Orchestra. A annual concert that brings back some nostalgia for the good ole' days in smalltown Wisconsin.

The music with the setting sun as a backdrop was something special. > > >

At nightfall we returned to the deck off Molly Malones to catch fireworks over Lake Superior. A 4th of July I'll not soon forget and made even more special because it was my birthday too.

Interesting things to do and see in Bayfield, Wisconsin.

When will the Bayfield Ice Caves Open?

Visiting Madeline Island in the Winter via the Ice Road.